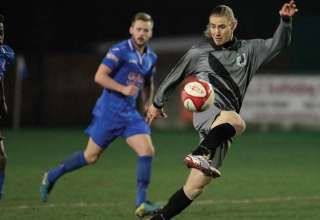 The lawyers for Canadian midfielder Mozzi Gyorio, the NASL and Minnesota United FC will be in New York Nov. 19.

That’s when New York Supreme Court Justice Ellen M. Coin is to hear petitions from the NASL and Minnesota United to have the breach-of-contract claims from Gyorio’s legal team dismissed.

As with any case before the courts, there are several complicated issues at play. Earlier this year (CLICK HERE), Gyorio launched a lawsuit in New York court against Minnesota United and the NASL, demanding compensation for a contract that was terminated during the 2014 season.

Gyorio, a dual Canadian-Hungarian citizen who grew up in Prince Edward Island, signed with Minnesota United FC in 2014. Hopes were high because he was an effective player for Tampa Bay in a previous NASL stint.
But, in 2014, Gyorio refused an assignment to an NPSL side, claiming the league was “unsanctioned” and not fully professional. He claims that the assignment was made because Minnesota had maxed out the number of internationals it could have on its roster and had its eye on bringing in another. After refusing the NPSL move, he claims that Minnesota issued a memorandum to all of its players that they would need to comply with “reasonable” requests made by the club (such as an assignment to an affiliate). Because the memo came out after the request — and after Gyorio signed a contract — he claims that he can’t be bound to an alleged after-the-fact change in policy.

After taking his claims to the league, the decision came down from NASL headquarters that Minnesota had cause to terminate Gyorio’s playing contract.

In its application for dismissal, the NASL claims that it did not interfere with Gyorio’s contract. As well, it says that Gyorio did not exhaust the options available to him.

According to the claim for dismissal, NASL lawyer William G. Primps pointed out the clauses in the player contract:

“The Contract, in Paragraph 13, states: (a) The parties hereto hereby agree that all disputes relating to or arising out of this Contract or Player’s relationship with Club or the League including, but not limited, [sic] disputes related to compensation, benefits, discipline, or the termination of this Contract shall be presented to the commissioner of the League for final resolution by the League.

“If either Player or Club is dissatisfied with the decision of the League, as referenced in section 13(a) above, such party may serve notice of a demand for binding arbitration on the other party within seven calendar days of the receipt of the League’s decision. The dissatisfied party must provide a minimum of three qualified arbitrators from which one will be selected by the other party.”

According to Primps, Gyorio never took the arbitration route, therefore the suit against the NASL should be dismissed.

The NASL claims that Gyorio was notified on Aug. 22, 2014 that his contract was to be terminated. On Nov. 4, 2014. “NASL issued a response finding that Minnesota United did not harm Plaintiff in sending him to the reserves.”

In its motion to dismiss, NASL claims “Plaintiff has not pleaded that he has pursued arbitration against either Minnesota United or NASL pursuant to the Contract’s dispute resolution clause. Instead, NASL was served with the Amended Complaint in this matter by hand-delivery on October 13, 2015.”

Minnesota United’s lawyer submitted a copy of a Sept. 24, 2014 email sent to the club by Gyorio’s legal team; it named three potential arbitrators as per the contract. A hearing was delayed so the parties could wait for the league’s final decision on the contract. The team’s lawyers claim a Nov. 11, 2014 email was then sent to Gyorio asking if arbitration was to go ahead. Basically, they’ve claimed to the court that the legal bases were covered on Minnesota United’s side.

Minnesota United has claimed that the New York court has no jurisdiction to rule on a contract that was undertaken in the state of Minnesota. In an affidavit, Minnesota United President Nick Rogers said that “No MN United representative has ever traveled to New York to meet with NASL.” He also said that the contract was negotiated over phone and e-mail between Minnesota United coach Manny Lagos, Gyorio and his Canadian-based agent, John Horvath. There’s no New York connection.

And, Rogers contested Gyorio’s claim that he was a victim of the international roster-spot numbers game. He said it was all about the player’s performance.

“In April 2014 the coaching staff determined that, at that point in the season, it was unlikely that Mozzi would ever appear in a MN United match as either a starter or substitute,” Rogers said in the affidavit.

He also said that Minnesota United had every right to send Gyorio to the NPSL.

“Assignments to other U.S.-based soccer clubs are explicitly authorized by the contract and do not require the player’s consent.”

Rogers said that Gyorio owes Minnesota United US$350 in unpaid fines for refusing to comply with his contract. He said that after Gyorio refused to comply with the NPSL assignment, he stopped communicating with the club.

The paperwork filed in the case (so far) can be found HERE.