If there’s one thing I have learned in my time as a soccer journalist, stories about jerseys are always big. Some of the most-read stories in the history of The 11 are the ones about new jerseys, third jerseys, when jerseys go on sale, where to find them.

Honestly, if a soccer team had its new kit designed by Marc Jacobs, it would get more hits than a major new signing.

So, with that in mind, here’s a sneak preview of FC Edmonton’s retro third kit that the team will wear when it faces the Fort Lauderdale Strikers on Saturday.

The new NASL is already using a retro-styled ball that honours the original NASL’s heyday of the ‘70s. And both the Fort Lauderdale Strikers (who adopted a look modeled on the old NASL franchise of the same name) and FC Edmonton (which wants to honour the Drillers of 1979-82) will turn back the clock when they face each other Saturday in Florida.

FC Edmonton coach Harry Sinkgraven has no major injuries to deal with on this trip. Of the players who are on the three-game trip, which wraps up Saturday, all are healthy. FCE is still looking for its first point on the trip, and it goes back to the stadium where it got its first-ever NASL win.

The Drillers jersey will be used again when FC Edmonton faces the Strikers at Foote Field Aug. 14.

FCE had hoped to wear the jerseys in matches against FC Tampa Bay, while the FCTB wore Rowdies jerseys from the ‘70s. But legal snags prevented FCTB from debuting its planned third kit. 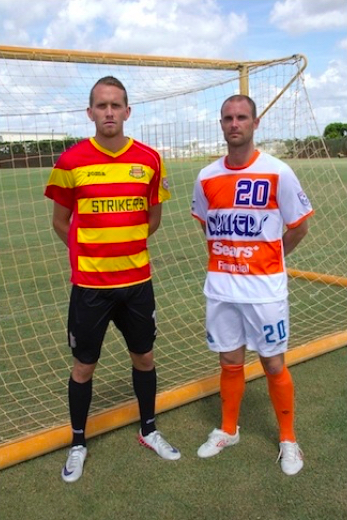 Here, FC Edmonton captain Chris Kooy (right) and Scott Gordon of Fort Lauderdale make you feel like it’s 1979. Except for the shorts. Whew. Thumbs-up to the numbers on the front, though.

FCE will have a limited number of the Drillers jerseys for sale at the Aug. 14 game.