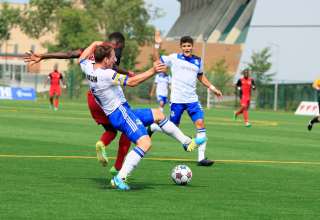 On Thursday, FC Edmonton trained at Clarke Stadium, where the temperature was at 17 C, only about two degrees Celsius below the average for this time of year.

When the Eddies arrive to San Antonio’s Toyota Field for Saturday’s clash with the Scorpions, it will be a little bit warmer. OK, a lot warmer. The daytime temperatures are expected to be in the mid-30s. The game will kick off at 7:30 p.m. Central Time, so it may be a bit cooler than the daytime high. Still, it will be a heck of a lot more uncomfortable than an average September day in Alberta.

But FCE coach Colin Miller said his team can’t use the heat as an excuse as it looks for its fourth consecutive win.

“Our mindset is that it’s not an excuse for anybody,” Miller said. “This is one of the fittest groups in the league; they know the shifts that they have to put in during training.”

Miller said going from one climate to another is the life of a pro footballer. He said that, in his playing career, he was called up to play for Canada right after a Scottish League match. It would be near the freezing mark in Glasgow, and then he would join his Canadian teammates for a game in the punishing Central American heat.

Tomi Ameobi, who set up Chad Burt’s opening goal in last Sunday’s win over Minnesota, says that, with so many southern teams in NASL, FCE has practice going into hot climates.

“No, it’s not what we have been used to for then last couple of weeks, but we’ve played in it (heat) before.”

The Eddies will make the trip without midfielders Michael Nonni and Milton Blanco. Nonni had to come out of last week’s game and was in street clothes on Thursday. Blanco is training but his knee is about another week away. Goalkeeper John Smits will also miss the trip to Texas because of a groin problem. But leading scorer Daryl Fordyce is making the trip; he was on the subs’ bench last week as he came back from tendinitis in the heel. But he wasn’t used.

“That’s a luxury I’ve not had since I have been at the club,” said Miller, “not having to use my top scorer.”

With a win, the Eddies would move, at worst, to within three points of top spot in the fall season standings (depending on what Minnesota does this weekend). The Eddies could move as close as two points to the top. And, in the overall standings, the Eddies are just three points out of a playoff spot.

“We have been on a fantastic run, game to game,” said Miller. “Now we have gone from consistently playing well enough to draw and win occasionally to being determined to win games.”

But Miller stressed that a few games does not a season make.

“We have not won anything, yet.”

Ameobi says the catalysts for the change in the team were the acquisitions of midfielder Cristian Raudales, attacker Chad Burt and Beto Navarro. They have helped change the team’s mindset.

“At the start of the fall season, we added a bit of experience to the team, with Beto, Chad and Cristian. They added competition to the squad. Now, we go out feeling that we can win anytime. And we can feel that the teams we’re playing are fearing us.”