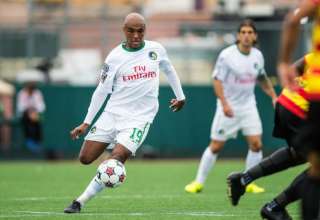 Give FC Edmonton credit. When a team like the New York Cosmos comes to town, a lot of players would revert to cliches like “it’s just another game.” The Eddies didn’t do that. They know the occasion will be special.

The Cosmos is coming to Edmonton to face the Eddies at Clarke Stadium Sunday. Even in the middle of a long weekend, which can be tough on attendances, the Eddies are expecting their biggest crowd of the season. The TV numbers on Sportsnet 360 should be up.

It isn’t just another game. The team with the most recognizable name, the most recognizable jerseys, and the most famous history out of any pro club in either Canada or the United States is back in the NASL as an expansion franchise. And the new Cosmos, which debuted in the fall season, sits in second place in the league. It boasts as close to a Designated Player as NASL can have, in Spanish international Marcos Senna. While most NASL clubs travel light, the Cosmos is expected to bring an entourage of up to 50 with from the Big Apple to the Alberta capital.

But, if the Cosmos gets a result in Edmonton, it’ll be a first. In the first incarnation of the NASL, the Cosmos never recorded a win over the Drillers — or even a draw — at Commonwealth Stadium.

“They are the biggest team in the North American soccer landscape,” said FCE coach Colin Miller. As a teen and a member of the Toronto Blizzard, Miller faced the old Cosmos, the team that featured legends Franz Beckenbauer and Johan Neeskens. Miller joked that he still has the bruises from his tangles with Neeskens.

But Miller said the hype can’t dominate his players’ thoughts.

“We can’t build this brand of the Cosmos to be the next coming of Barcelona,” he said.

That is, the worst thing the Eddies could do is show the Cosmos too much respect.

Defender Edson Edward said the fact the team was bitterly disappointed about only getting a 1-1 draw in Tampa last weekend shows how the culture has changed in the club. The team that finished in last place in 2012 now isn’t happy with just a draw on the road. And, so, he doesn’t expect his teammates to be awed by the Cosmos’s visit.

“I think that game showed how the club is changing,” said the Eddies’ right back. “We’re not just going to go on the road and be happy with a point. But, of course we are excited about this weekend’s game. It’s more than a team. It’s a brand. With the history of the team, with Pele being involved with the Cosmos, and the high number of ex-MLS players on the team, you expect them to be good right away.”

Included in that list of ex-MLS players are three who used to wear Toronto FC red: Peri Marosevic, Joseph Nane and Hunter Freeman.

For Wes Knight, who broke his foot in the second game of the spring season and has been out for four months, Sunday’s match could mark his return to the lineup — and his first chance to play a game in front of the Edmonton fans.

“I’ll be available for selection if I have a good week of training. It’s been a long wait. Four months is the longest period I’ve ever been injured in my career. And this Cosmos game is huge for me. Not just because I may get the chance to play against a team I’ve never played against before in my life, but because I finally will get a chance to play in Edmonton.”

And Knight said it’s not unfair to rate the Cosmos name higher than any team in MLS.

“No disrespect to the L.A. Galaxy or other MLS teams, but when you go abroad and say ‘New York Cosmos’ a bell goes off in people’s heads.”