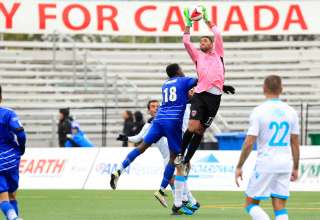 The mercury sat at the 5 C mark, with wintery winds whipping across Clarke Field. Miami FC coach Alessandro Nesta, thanks to injuries and immigration-paperwork woes, had to juggle his lineup.

All the ingredients were in place for FC Edmonton to extend a home undefeated streak that stretched all the way back to April, right.

No. Not at all. The Eddies saluted Sunday’s awful, blustery weather by giving goals away like it was Christmas, losing 2-0 to Miami FC. Dario Cvitanich and Vincenzo Rennella got the goals, but each were presented what amounted to open-net tap-ins thanks to critical errors from the home side.

The Eddies are the league’s stingiest team, giving up just 14 goals in 22 games. But four have been conceded over the last two.

“I’ve been disappointed with the four goals we’ve given up over the last two games, “ said FCE coach Colin Miller. “They’re schoolboy errors.”

Miami FC was forced to leave Ariel Martinez and Wilson Palacios do to visa issues. Meanwhile, FCE got bad news when striker Daryl Fordyce — set to play his 100th game with the club — didn’t pass a fitness test after tweaking his knee in training on Saturday. So, Canadian Ben Fisk got his first NASL start.

The Eddies, despite playing the first half in the teeth of the wind, started brightly, Nik Ledgerwood, fresh off his man-of-the-match performance for Canada on Tuesday, ripped a volley that forced Miami FC keeper Daniel Vega into an excellent fingertip save.

Fisk thought he’d given the Eddies the lead when he cut off the wing and hammered a shot that beat Vega, but went off the underside of the bar and stayed out.

“I thought it was going in,” he said. “It’s something that I work on in training.”

But the Eddies were undone in the 14th minute. With the wind at their backs, Miami FC consistently pressed the FCE backline, knowing it was impossible for the defenders to hammer a ball down the field. It also made kicking the ball out a challenge for keeper Matt VanOekel. So, with the ball in the box, Van Oekel rolled it out to midfielder Nicolas Di Biase, who was facing goal just outside the area. Di Biase didn’t control the ball well, and didn’t know that Cvitanich was coming from behind. Cvitanich picked Di Biase’s pocket and put the ball into the net.

The goal rattled the Eddies, and another giveaway, created by some errant passing by the defenders, saw Michael Lahoud get good sight of the Eddies’ goal, but he blazed his shot just wide.

“No more messing about in the back,” said Miller at half. “That goals was criminal. You’d think we would have learned from last week.”

FCE striker Tomi Ameobi put the ball in the back of the net late in the first half, but the linesman’s flag was up. Fisk then had a point-blank chance to tie it just before the half, but Vega made an outstanding stop.

Miami FC came out in the second half with two banks of four players defending deep. Nesta made sure that all hands would be on deck to defend against an Edmonton team that would press with the wind at their backs.

Fisk was once again the catalyst, forcing Vega into save at the near post.

But, as the half wore on, FCE had lots of possession in the Miami half, but couldn’t get efforts on target. And, then, they were undone by another error.

Centre back Pape Diakite, who gifted away a goal against Ottawa the week before, misjudged a goal kick from Vega. He leaped to head it, and the ball went over his head, instead. Rennella ran onto it, rounded VanOekel, and made it 2-0.

From there on in, Miami FC did well to kill the game — a professional performance from a team that’s been rebuilt by big spending after finishing dead last in the spring season.

After the game, Nesta said that, both mentally and physically, his team is in a good place. And, he said that Miami FC is good enough to go to the NASL final.

But Miller said he wasn’t impressed by Miami — that the two goals were products of Edmonton’s mistakes.

“I didn’t see a $3-million difference between the two teams today,” he said.

The Eddies remain six points behind the New York Cosmos for the fall-season lead; the Eddies have two games in hand. But the Eddies simply can’t afford to burn those games in hand as they did on Sunday.