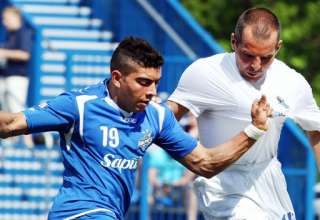 FC Edmonton has more bad news on the injury front.

The club will now have to cope without veteran central defender Paul Matthijs for the long term. There are fears that the Dutch defender could miss the rest of the NASL season with a hernia. While he is resting at the moment, this could require surgery in the coming weeks. The goal, really, is that Matthijs recovers to play in 2012.

Matthijs, who missed Friday’s 1-0 loss at home to Carolina, has been a steadying influence in the back, bringing a sense of calm and acting as a defensive on-field coach for what is a very young backline. His effect on raw-but-talented central defence partner Paul Hamilton has been noticeable. When Matthijs was able to get into the lineup after missing the opening of the season due to a knee injury, there was a noticeable rise in Hamilton’s confidence and level of play.

On Friday, FCE Director of Soccer Operations Joe Petrone said the club is very close to signing a young, talented defender — now the need to bring in the body becomes that much more urgent. He also said that the team would be bringing in a veteran Dutch midfielder later this year.

We can expect an announcement on the defender after the team returns from its road game Saturday in Minnesota.

FC Edmonton would like to add a veteran to the midfield to shepherd the youngsters just as Matthijs was doing with the defenders.

The team is currently only using 26 of its 30 allowed roster spots, so there is room to make some moves.

The team lost goalkeeper Lance Parker for the season after he suffered a compound fracture to his right arm during Friday’s loss to Carolina.