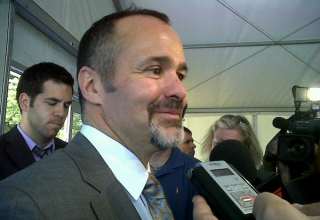 It promotes itself as the “Bank of Soccer in Canada.” And so, BMO has added one more notch on that belt in teaming up with the Major League Soccer-bound Montreal Impact.

The financial institution and soccer franchise came together at Saputo Stadium on Tuesday to announce a five-year partnership in which BMO becomes the organization’s premier sponsor when it makes its MLS debut in 2012.

While associating with the Impact would seem to be an obvious choice given BMO’s existing partnerships the country’s other MLS clubs, the Montreal connection between the two would especially seem to be a no-brainer.

“That was one of my selling points. You’re in Toronto, you’re in Vancouver but you’re the Bank of Montreal; you have to be with Montreal,” Saputo quipped.

BMO already supports 900 youth soccer teams across Canada, about 160 to 170 of which are in Quebec.

Jacques Menard, president of BMO Financial Group, Quebec, said he “wouldn’t be surprised” if that total reaches 200 “sooner or later.”

The grassroots and community involvement that soccer has established in the city is a big selling point as a sponsor. “It makes a lot of sense for us to align ourselves with a franchise and an activity that our clients and the public really care about. The Impact is a great vehicle, not only to reach clients and the community’s broader base but also to reach kids and young families,” he explained.

Saputo emphasized the organization’s commitment to remaining accessible. Together with BMO, they will continue to promote and encourage soccer among local youth through various initiatives. That includes the opportunity for players to be a part of the in-game experience. As part of the deal, 100 soccer-playing youngsters will be welcomed to every match to serve as flag-bearers, ball retrievers and escorting players onto the field. Each group will also have the chance to fundraise for their own team.

“It’s a partnership that will be great for the future of our sport and of our team,” Saputo said.

Just as it does with Toronto FC, BMO will be featured on Montreal’s MLS jerseys. The team’s blue colour scheme and Impact moniker will remain but the logo will get a makeover ahead of next season. The new design will be unveiled at some point this summer and the new jersey will follow suit in the fall.