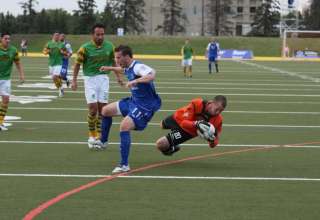 FCTB's Jeff Attinella makes a save on FCE's Paul Craig.

FC Edmonton is making a statement.

“We couldn’t have asked for a better start,” said midfielder Shaun Saiko, who scored FCE’s third goal and earned the Man of the Match nod after a dominant performance. “We have shocked a lot of people, but we haven’t shocked ourselves, and we think that’s there’s better things to come.”

FC Tampa Bay came out of the gate looking to squeeze Kyle Porter, last week’s NASL player of the week, out of the game. Porter, who plays the right-sided attacking role in FCE’s 4-3-3, was man marked by FCTB’s lone Canadian, Mozzi Gyorio. Porter would sometimes see two or men pressing the right sideline to try and squeeze him out of the game, which is unusual to see when the attacker is playing such a wide role.

Porter would open the scoring with maybe the easiest goal he’ll score in his career. After a FCTB corner was turned over, the men wearing green were caught ball-watching. Five FCE attackers steamed towards FCTB keper Jeff Attinella, with only two defenders back to help. Kyle Yamada smacked his shot off the post, but it bounced right to Porter’s feet, who settled the ball on the hard artificial surface before poking it across the goal line.

It was Porter’s fourth goal of the season.

Yamada would get his goal, though, before the first half closed.

Off an FCE corner, Yamada lifted himself off the ground to try an audacious one-time aerial kick. The ball bounced off his feet, only inches from him. But, because of the high bounce off the turf, forward Paul Craig was able to close down the FCTB defender from clearing the ball from the box. Yamada got up and hammered a volley home.

FCTB coach Ricky Hill found himself two goals and two men down at half time. He had to burn two subs before the halftime whistle. Striker Warren Ukah had to leave, bleeding profusely after a clash of heads with FCE defender Paul Hamilton. And Chad Burt, who scored against FCE two weeks ago in Florida, left the game favouring his right leg.

FCTB surged early in the second, desperate to make up the gap. Because of the subs, the club abandoned the man-mark-Porter strategy and pushed men forward. It was unlucky not to halve the lead, as Tsuyoshi Yoshitake smacked a headed attempt off the post after David Hayes made a perfect cross.

Yoshitake headed wide on another great chance later in the half.

After Yamada was forced to leave with a leg injury, his replacement, Michael Cox, won a penalty for FCE, after he was barreled over in the box by defender J.P. Rodrigues. But Cox took a timid penalty, too close to the keeper, that was saved. Worse yet, the rebound came right to Cox, as the FCTB defenders didn’t come in to the box to chase the ball. Attinella was on the turf, but Cox simply touched the ball back towards him.

Cox atoned somewhat for the mistake later in the match, working a perfect one-two passing sequence with Saiko, which the midfielder had an easy time slotting in.

“The possession was big,” said Saiko. “We wanted to come out and put our stamp on the game.”

Sub Shawn Chin ended the rampage with a wonder strike from 25 yards out for his first NASL goal.

Saiko said the offensive explosion had a lot to do with the tinkering the team has done on the training ground in the last week.

“We have been working on our positions in the box,” he said. “And linking up myself, playing the number-10 role.”

FC Edmonton hasn’t lost since the 5-0 drubbing to the Montreal Impact in its NASL home opener. Since that game, the Impact and FCE have gone in different directions; Edmonton hasn’t lost, and Montreal hasn’t won. FCE will look for revenge when it goes to Stade Saputo on Saturday.