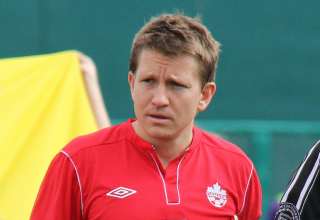 Terry Dunfield’s soccer journey will take him to Edmonton.

The veteran Canadian midfielder’s trial with the Eddies has been successful — coach Colin Miller confirmed that Dunfield will sign with the club. Dunfield trained with the Eddies at Clarke Field Tuesday after arriving in the city Monday night. He joined the team on trial while the Eddies were on their Scottish tour, and played in games against Newcastle United’s youth team and Queen’s Park.

“Terry is going to sign with us,” said FCE coach Colin Miller. “I’m delighted with that. He still has to be approved by the league and so on and so forth, but I’ve worked with Terry both at the Whitecaps and with the national team, and I know all about him. I know his history, I know the qualities that he brings to the club. He’s a leader, he’s an experienced professional player and he’s top levels of the game for a number of years. He will add a great deal to the group.”

Miller compared Dunfield to Nik Ledgerwood, another Canadian national-team veteran who signed with the Eddies in the off-season.

“He’s a Nik Ledgerwood type. He’d kick his granny to win, same as Leg does. I’m not saying Leg would kick his granny, but he probably would in order to win, knowing him. That’s the type of people we want here now, we want winners.”

Dunfield chose not to speak to the media today, as he just got into Edmonton and wants to take a day or two to get acclimated to his new club and city.

Dunfield has made 14 appearances for the Canadian senior national team. He turned 34 in February. He came up through the Manchester City and played at various clubs in England before moving back home in 2010 to play for the Whitecaps. He was later traded to Toronto FC, where he was named the Reds’ player of the year in 2012. But injury problems led to his release in 2013, and he’s since played in England for Oldham Athletic and in Scotland for Ross County.