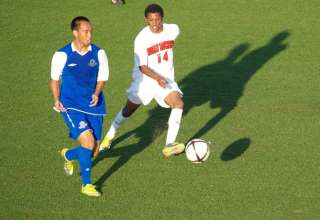 FC Edmonton won its first match of the preseason Saturday, 4-1 over the Univesity of New Mexico in Arizona.

In Thursday’s 1-1 draw with UNM, coach Harry Sinkgraven started a group of players that included proejcted back-ups. On Saturday, he played what, depending on some signings to come in the next couple of weeks, will be close to the starting XI fans will see April 9 when FCE opens its inaugural NASL campaign against the Fort Lauderdale Strikers.

That group included brand-new signing Shawn Chin, the former University of South Florida standout midfielder, who has also made appearances for the U.S. U-20 team. He came in as a second half sub.

As expected, there was a marked difference between the two games; FC Edmonton scored twice in the first half — both goals coming from native Albertans.

Paul Hamilton, the former CIS MVP, got on the end of an Alex Semenets free kick just 13 minutes in. Calgary native Kyle Yamada made it 2-0 after getting on the end of a corner from native Edmontonian and former Middlesbrough youth prospect Shaun Saiko.

In the second half, Paul Craig, a former standout at both the University of Prince Edward Island and University of Saskatchewan, scored twice. Craig’s first marker came off a penetrating pass from Chin.

Brazilian trialist Eduardo Denali put in 56 minutes for FCE, the most he could give considering he just arrived in Arizona.

Michael Green got the Lobos’ only goal of the game on a corner kick, after FCE fullback Niko Saler committed a foul in the box.