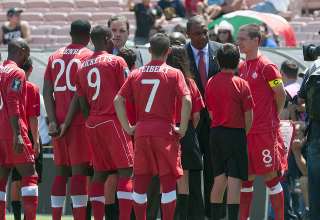 And, patching together my off-the-record sources, other writers’ analyses and news off the wire makes for a column that is far too speculative for my usual comfort level. But, this FIFA news is so remarkably different in terms of scope and possible effects, that I feel I need to tackle it in some way. So, speculative it shall be.

First off, if what you will read below sounds like I am defending the corruption and fraud alleged by the U.S. agents, I’m not. But, lately, I’ve been put in the un-fucking-enviable position of devil’s advocate, and it’s making me come off like a slimeball. A couple of weeks ago, I noted that the ravings of the Internet mob should not influence the punishments handed down to the idiots who, outside of BMO Field after a TFC game, launched a #FHRITP tirade on camera. Now, in questioning American motives (and timing) for these charges against FIFA officials, I’m going to look like a jerk again.

The arrests of six key FIFA officials, including CONCACAF President Jeffrey Webb, came just a couple of days before the 209 member associations were to vote in presidential elections. Sepp Blatter, the domo of the old guard, looked like a lock to win. But, the United States Soccer Federation was lobbying hard for underdog Prince Ali bin Hussein. Voila! Thanks to an extradition treaty with Switzerland, and under sweeping anti-fraud legislation that, ahem, “allows” the Americans to snatch their quarries even if they’re half a world away, and many in Blatter’s inner circle are out of the way.

Now, we can debate the international holy-crap-that’s-scary-and-I’d-rather-let-the-terrorists-win ramifications of laws that allow the U.S. to arrest people in other countries, simply because they were using American services or American-based Internet service providers. It’s all very Big Brother. And, as much as FIFA needs reform, it gives me the crime-and-punishment heebie jeebies. I’ll leave it at this: If you think Canada’s Bill C-51 is seriously problematic, but don’t have an issue with Americans using sweeping anti-fraud laws to prosecute foreigners, you may just be a tad hypocritical on how you think people’s rights should be protected.

Now, it would be conspiracy-theory thinking to the max to suggest that American prosecutors and the USSF were acting in concert. It takes a long time to gather evidence and make sure all the legal ducks are in neat rows. But, as you pull the camera wide, the timing of this all feels, well, convenient.

And this is where it gets interesting. Will other federations, especially the Blatter loyalists, see this as U.S. lawmakers arresting officials, or the USSF with a knife out?

And let’s bring this back to one federation, specifically. The Canadian Soccer Association. Let’s not discount this fact: The CSA has been at or near the top of the FIFA boy-scout list. From the Women’s U-19s in 2002, to the U-20 World Cup in ‘07, to the Women’s World Cup, scheduled to start June 6 — we’ve been there at every turn, showing off just how ready we are for the 2026 World Cup. We took the bullets on the artificial turf PR battle; FIFA badly wants artificial turf to gain worldwide acceptance, and we gladly carried that cross for them.

So what of us loyalist Canadians?

Partners, not friends
There is a working relationship between the Canadian Soccer Association and the USSF; but to suggest that it’s a friendly relationship would be an exaggeration.

In the most recent issue (No. 5) of Plastic Pitch, CSA president Victor Montagliani summed up the relationship.

“Until two to three years ago, the relationship was non-existent. Basically, we were a foregone conclusion to our friends from the south. But we have strengthened our relationship, first with the USSF, and now we have better relationships at the MLS level, and the NASL level. Our relationships are improving but, remember, it’s been just two or three years.”

In that same issue, former CSA president Dominique Maestracci said that the current system used by Major League Soccer, which allows the Canadians teams to carry only a minimum of three Canadian players each, was intended to be a one-year Band-Aid deal. But he said the Americans went back on a handshake deal, and we’re stuck with what we have now.

While Canada can place up to 16 players (on our dime) in the NWSL, and has Canadian teams now in MLS, NASL and the USL, the relationship with the USSF is not rosy. And, any progress that has been made in the last two or three years will be obliterated if what’s seen as a U.S.-led action costs Canada in any way, or if it casts a shadow over the Women’s World Cup that’s scheduled to begin in Edmonton on June 6.

And, any break in the relationship between the Americans and Canadians affects not only international competitions, but our MLS, NASL and USL teams.

In that same interview, Montagliani expressed frustration with MLS and NASL, who allow Canadian teams to treat American players as domestics, but forbid American teams from treating Canadians as domestic players.

“In regards to seeing Canadian players as domestics, we respectfully disagree in regards to their position,” says Montagliani. “Our position is clear, from a legal standpoint and from a moral standpoint.”

Nuclear option
Montagliani has never spoken about what I am about to write about next. The nuclear option. But I’ve heard it whispered in Canadian soccer circles, though — that we in Canada should require our teams to treat Americans as foreigners. They will tit. We will tat. And if our relationship becomes more strained, does that put us closer to Defcon One?

Do we see the Americans as friends? When it comes to soccer politics, absolutely not. Montagliani again: “For me, it’s not about growing the game. It’s about growing the Canadian game. And acquiescence to the United States is not the way to do it. The way to do it is to develop a real partnership, a real relationship and have meaningful debate between us. Look, I don’t wake up in the morning and wonder what I can do to help U.S. soccer. I don’t. And, to be fair, I’m sure they don’t think about what they can do to help Canadian soccer, either.”

Of course, all of these musings would be moot if FIFA were to suspend the Americans for political or judicial interference with football. Remember, FIFA expects all corruption charges to be handled by its Ethics Committee; to not allow FIFA to police itself is to risk banishment.

And, with our soccer pyramid being so intertwined with the Americans, I can’t even begin to imagine if that road is the one taken.

(UPDATE: We now have news that NASL CEO Aaron Davidson, who has been interviewed many times on this site, will be charged in relation to this sting)