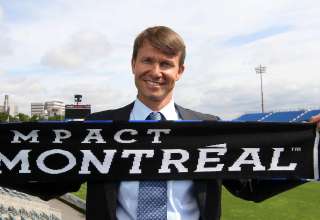 Brian Ching, scorer of 77 career regular-season goals, made it public that he would rather retire than be plucked off Houston’s roster and go to the Impact. What did Marsch do? He made Ching the first pick of expansion draft.

Now, the questions are: Will Ching back down? Will he retire? Or will the Impact make a deal that sends him back to Houston?

“We’d be delighted to have him,” Marsch said after the team had announced its 10 picks and a couple of subsequent trades.

“When you see the list, Brian’s name sticks out.”

Marsch spoke with Ching on Wednesday morning, so the big Hawaiian had to have known his name was getting called, even though he’d made it clear that he didn’t want to leave the Dynamo.

But Marsch said the draft wasn’t just about finding players who will eventually wear the new Impact jerseys, which will be unveiled Dec. 1. It’s also about ensuring that the club has valuable assets that other GMs would want. And that means having the kind of players who would make great trade bait.

“It’s about how to maximize the value of the draft,” said Marsch.

That’s doublespeak for, if Houston wants him back, how much is it willing to offer?

“Deeply disappointed that Ching was selected in draft,” he tweeted. “He is Forever Orange in my mind. We’ll have more on this as the situation plays out.”

Of the players selected and/or acquired through trade — none of them are Canadian. So, the Impact still have no Canadian players on its MLS senior roster.

Brian Ching, HOU — Says he will retire if picked by the Impact. Brian, you are on the clock. Bluffing or not?

Zarek Valentin, CHV — Valentin’s inclusion on the Goats’ unprotected list came as a surprise. He comes from the talent factory that is the University of Akron and was the fourth overall Superdraft pick, in 2011. Loads of potential.

Justin Mapp, PHI — TFC fans likely still remember for his part in the Union’s 6-2 demolition of the Reds this season. That Player of the Week performance is the high point of his career so far.

Bobby Burling, SJ — Veteran defender who has played for all three California teams. Will bring some stability to the backline.

Jeb Brovsky, VAN — Made 24 appearances for the Whitecaps this season. Second-round draft pick in 2011. Like Valentin, he is young, though Valentin has more upside.

Collen Warner, RSL — Talented, speedy player who would have broken through on many other teams, but he was a depth piece in a loaded RSL side. RSL left a lot of interesting picks available to be made, but Marsch went with the young blood.

Josh Gardener, CLB — Gardner is nearing 30 years of age, but had some very good Div. 2 years with the Seattle Sounders and Carolina RailHawks. Bet that Impact sporting director Nick De Santis was whispering in Marsch’s ear on this one.

Sanna Nyassi, COL — Nyassi’s speed can cause real problems for fullbacks. He can be effective on the wings or up top.

James Riley, SEA — Riley was selected then sent to Chivas in exchange for striker Justin Braun and midfielder Gerson Mayen. The Impact will know of Mayen through his time spent on loan over the past two seasons on loan with the Div. 2 Miami FC/Fort Lauderdale Strikers. Marsch and the Impact brain trust believe Mayen is ready to make the step up. And Braun can be a big-time striker in MLS if he finds some consistency. He scored eight times this past season, and 24 times over his past four years with Chivas. But his goals come in bunches. Still, he is now the Impact’s top offensive threat… if Ching retires or is traded back to Houston, that is.

Seth Sinovic, SKC — Another young defender; Sinovic has 40 games of MLS experience under his belt. Looks like the Impact is stocking up in the back and will see what works.

Tyson Wahl, SEA — Not a draft pick, but the veteran defender was acquired in a deal for allocation money. Again, Marsch, a defender himself, is looking to bring as many fullbacks into the fold as possible.