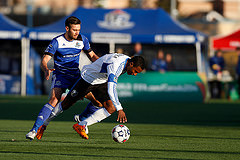 More often than not, when a team goes on a run towards a championship or trophy, there is one hurdle along the way that it clears by the thinnest of margins.

There’s the FA Cup winner who was taken to a replay by a lower-division side in the fourth round. There’s the NCAA basketball champion who needed a buzzer beater or overtime to beat a low seed in mid-March. We can talk all we want about the late interception that earned the New England Patriots the Super Bowl, or the Deflategate that preceded it, but the truth is that, in their first playoff game of 2015, the Pats needed to make a major comeback effort to knock off the Baltimore Ravens.

So, when you recall Tuesday night’s epic CONCACAF Champions League semifinal second-leg match between the Montreal Impact and Alajuelense — a nail-biter of a game in Costa Rica that saw the Impact “lose” 4-2 but hang on for a 4-4 aggregate score, with the edge being away goals — you should also stop and think back 11 months.

No one at Clarke Stadium or Stade Saputo threw shoes on to the pitch as the Alajuelense supporters did in Costa Rica on Tuesday. But this Impact team may very well have been defined by the Amway Canadian Championship semifinal back in May of 2014.

At the Impact’s very first hurdle, it was seconds away from being eliminated. Remember that the aggregate score between FC Edmonton was 4-4 as the clock went past the 90th minute in the second leg. Yup, 4-4, like the series with Alajuelense, but it was FC Edmonton who held the advantage on road goals. Six minutes of time was added; and, in minute six of that added time, referee Drew Fischer judged that FC Edmonton’s Mallan Roberts had handled the ball in the box, even though the Eddies defender had put his arms behind his back. Patrice Bernier buried the last-gasp penalty, and the Impact had just survived.

This column isn’t going to pick at scabs and re-examine if Fischer’s call was the correct one or not. A lot of ink and/or disk space was spent on that 11 months ago.

But what can’t be denied is that, still, throughout this whole run, the team that came closest to ending the Impact’s dream was FC Edmonton. No Central American side has come close to that scare. Yes, Alajuelense eventually got it to 4-4, fuelled by a partisan crowd that littered the field with debris and helped by a match official that deemed no tackle dirty enough to warrant a card. But, that fourth goal, from Jonathan McDonald, didn’t come till the third of four minutes of added time. After McDonald scored, Alajuelense was left with just seconds to score again — and, in truth, the Impact was in a comfortable position.

What makes sport so compelling is a team can barely get by the first hurdle, and then get stronger along the way. The Impact, a team that got nowhere close to the MLS playoffs last season but qualified for the CCL by scraping past FC Edmonton and then beating Toronto FC in the Voyageurs Cup final, is now in a position to make history.

More Canadian Spots
As well, we can hope that this gives the Canadian Soccer Association more fuel for its argument that Canada deserves more than one spot in the CCL. In 2012, Toronto FC got to the semifinal. In 2015, the Impact has now made the final. Compare that to the other CONCACAF club football “powers.” Honduras gets two allocations and has yet to get a team past the quarterfinal since CONCACAF went to the “Champion League” format. Guatemala gets two allocations. Guatemala! Again, no team past the quarter-final stage of the CCL. Panama has never had a team past the quarters of the CCL, but gets two spots.

Yes, the difference is that those countries have our own leagues, and Canada doesn’t. In a perfect world, if the vision for a Canadian “Division 1A” is realized, this country could have one spot for the winner of our domestic league, and another spot through the Voyageurs Cup, so the MLS (and possibly NASL clubs) wouldn’t be shut out of the process.

And, if Montreal does win the CCL, it can’t go back to defend its title. Vancouver is the representative for the next CCL, and I believe one of the tournament’s failings is its failure to reserve a spot for the defending champion. A spot should be allocated for the champ; and it should be done in such a way so that it doesn’t penalize other qualifiers from the winning team’s nation. That defending-champ spot should not be tied to a national allocation; so, if the Impact came back, the Whitecaps wouldn’t lose their spot just because Canada has just one CCL entry at the moment.

Again, there are plenty of spots where CONCACAF can cut allocations to bring back a defending champ — and give Canada more spots. I’ve just listed a bunch of Central American countries that — given their recent histories in the tournament — are overrepresented.