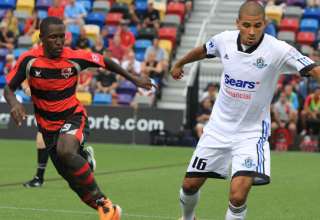 Even though Eddie Edward was a regular at fullback for the Puerto Rico Islanders in 2012, the Ottawa native never felt like he’d settled with his new team.

So, when the option on his contract came up, he and the club decided to mutually part ways — and he decided to make the return to Canada by signing with FC Edmonton.

“It was mutual for me to leave,” said Edward, who signed with the Eddies earlier this week. “I never really kind of felt like I was in place there. I never felt like I was settled. It had nothing to do with the coach or the players. Coach (Adrian Whitbread) was great to me and the guys were great.”

But he was concerned that the Islanders hadn’t publicly announced the re-signing of any key players — and, for someone who grew up in Ottawa and later spent two seasons on FC Dallas’s roster, Puerto Rico can feel isolated and out-of-the-way.

“For me, it’s nice to be able to play in Canada again,” said Edward. “Yes, it is far away from Ottawa, still, but I wanted to be in Canada.”

And while the Eddies finished the 2012 season at the bottom of the NASL standings, Edward said he didn’t think the team was nearly as bad as its record showed.

“I liked what I saw from the team, it has a lot of potential.”

Edward is more comfortable playing on the right side, but can also play on the left. With Antonio Rago the incumbent on the right side, it’s more likely that Edward would be seen as a left-sided option, depending on whether or not FCE use newly acquired defender Lance Laing on the left side or in the middle with Paul Hamilton. But Edward’s attitude is that he’ll go where the team needs him.

As well, games against FC would give Edward the chanc to talk to one of his best friends, Kenny Caceros. The pair played together in the Ottawa youth system, played together with the Ottawa Fury. And Caceros would rave about how much he enjoyed being an Eddie. And the message was getting across to his friend — come play for Edmonton.

“I spoke to Kenny for a while, and even during the season. He told me it was a great organization and he liked where the team was heading.”

Back in April, Caceros and Edward faced each other on the field as the Eddies drew the Islanders 0-0 in the Caribbean.

“It was really special to have the chance to play against Eddie,” said Caceros bacl then. “It’s been a year since I have seen him and it’s been a few years since we’ve played together. But we have never played against each other before. Eddie is a great player, a strong player, of course he was at the MLS level (with FC Dallas).”

When Edward gets to Edmonton, he will lean on Caceros, who will show him around town. And, before Edwards gets his own place to live, he might need some more hospitality from his old Ottawa friend.

“I know Kenny still has his place, so I might need to stay on his couch for a few nights.”