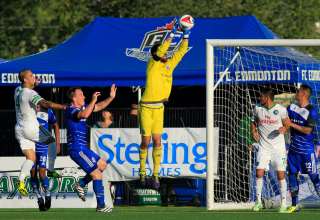 “I think other teams are starting to realize that now,” said striker Tomi Ameobi. “And, of course that raises the stakes for us, it puts more pressure on us going into games. But I think the lads can handle the pressure extremely well.”

Two late goals — both coming on rebounds from Ameobi’s shots — allowed the Eddies to turn around a game that they could very well been out of at halftime. Nik Ledgerwood got the equalizer, turning home a chance after Ameobi’s initial chance struck the post; and Daryl Fordyce got the late winner after Cosmos goalie Jimmy Maurer made a diving stop on Ameobi but could do nothing about the rebound.

But, the Cosmos could have buried the Eddies early. Juan Arango gave the Cosmos the lead after the Eddies defence parted after two clever passes from Yasmani Duk and Yohandry Orozco.

The Cosmos could have had more. Twice, Sebastian Guenzatti was absolutely robbed by Eddies keeper Matt VanOekel, who referred to his day’s work as a “fun day at the office.” On the first Guenzatti’s shot was deflected by Eddies fullback Shawn Nicklaw, MVO had to dive almost backwards in order to get enough of his hand on the ball to deflect it off the post. Then, late in the half, Guenzatti skipped through a couple of Eddies defenders, and then slammed a shot that VanOekel sprawled to save.

“The Cosmos gave 18 players on the field, seven of them wearing blue jerseys.”

Whatever Miller said in the dressing room, you hope that he’s recorded for future use — because it was an entirely different Eddies team that came out in the second half.

Ameobi, who came on as a first-half sub for the injured Sainey Nyassi, created the Eddies’ first great chance when he backheeled a ball into Shamit Shome’s path. But the teenager’s shot was saved by Maurer.

Shome thought he had his first NASL goal just after the hour mark. But his headed effort was correctly waved off for offside.

But, as the second half went on, the game’s pace only quickened. The Cosmos then got a great chance to make it 2-0. After a Ledgerwood giveaway, Duk was on a clear breakaway that began inside his own half. He got into the box and decided to try and round VanOekel. The keeper came out and challenged; if he got it wrong, it would be a penalty kick and a red card. Instead, he got it just right, kicking the ball away from Duk’s feet.

“I think Matt’s been pretty well our man of the match every game of the season,” said Ameobi. “He’s put in the work in the offseason and he’s reaping the rewards for it.”

And the next time the Eddies came down the field, they equalized. Ameobi’s shot went off the post, but came right into the middle of the penalty area for Ledgerwood to pound in.
The Cosmos then had a wonderful chance to take the lead. Sub Lucky Mkosana chested a ball down in the box and had what he thought was an open net. But Nicklaw scrambled back to the goal line and, well, Mkosana’s shot hit him and caromed out of danger.

“I don’t believe in luck. It’s about execution. We didn’t execute.”