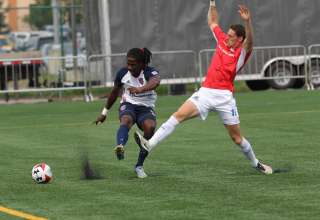 The Eddies were determined not to lose 1-0 again. FC Edmonton finished the NASL spring season by losing by that very scoreline in five of their final six games.

Well, the game was indeed more open, but the Eddies still suffered a one-goal loss Sunday at Clarke Stadium. The Indy Eleven got goals from David Goldsmith and Eamon Zayed, and beat the Eddies 2-1 in front of 3,285.

All of the goal scoring came in the first half; the Eddies made a desperate push to get the equalizer late in the second half and created a series of good chances; but it felt like the Eddies of the spring seasons, with shots going right at the keeper or close-in chances being sent off-target.

“It’s the final ball in the final third; that was the difference,: said Eddies coach Colin Miller.

“We are getting the ball into good areas, we just aren’t getting any breaks.”

But, like Eddies supporters have seen far too often this year, the home side began the game sluggishly. Goldsmith, who appeared at a Wales U-19 camp and played for West Bromwich Albion’s academy before going to Butler University, got a goal in his first NASL start. It came just seven minutes in, a tap-in off a rebound from Don Smart’s shot. Smart blew past Eddies fullback Pedro Galvao on the right wing and forced keeper Tyson Farago into a good save, and Goldsmith was there to clean up the garbage.

Smart could have made it 2-0 just a minute later. Just as he did only moments before, he blew around Galvao on the wing, but this time Farago made a great save and the Eddies got the rebound away from danger.

The Eddies grew into the game, and Fordyce had a great chance to score after receiving a great pass from Ben Fisk. But Indy keeper Jon Busch got enough of his hand to the ball to send it over the net.

Fisk, who Miller identified as the Eddies’ best player of the first half, would strike again, sending in an inch-perfect cross for Tomi Ameobi to head home. For Ameobi, it was a special way to celebrate his 100th appearance as an Eddie.

But, with the Eddies having clawed back in the game, they allowed Indy to re-take the lead in pretty short order. Striker Eamon Zayed took a great through ball from Ben Speas and caught the Eddies back line on their heels. As he slipped, he was able to place the ball off the post and in to make it 2-1 before the break.

“We had a poor start and we got the game level and should have settled it down at the point, but then, shocking defending,” said Miller.

Ben McKendry made his Eddies debut, coming in as a second half sub. McKendry, along with subs Dustin Corea and Jake Keegan, added life to the Eddies attack and they created a series of chances. Corea had a free kick and good look on goal both saved by Busch, while defender Karsten Smith put an effort over the bar late in the game.