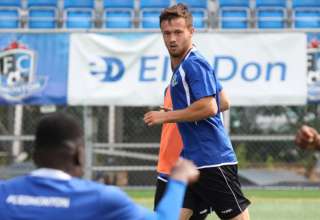 Ben Fisk and Ben McKendry grew up in the same East Vancouver neighbourhood. They’ve played soccer together since they were kids. They both came up through the youth ranks of the Whitecaps.

Now, they’ll be FC Edmonton teammates. Fisk is in his second year with the Eddies, and McKendry’s loan deal that sees him move from Vancouver to Edmonton was sealed on Wednesday.

“In a nutshell, we grew up in the same neighbourhood in Vancouver and played together since we were five,” said Fisk.  “It’s awesome to have him and, on and off the field, I think he’ll be great for the team.”

Last Friday, McKendry was contacted by the Whitecaps and was told that FCE coach Colin Miller was interested in acquiring him on loan.

“Right away, my reaction was yes that’s something I’d like to do,” said McKendry.

“I’m pretty thankful for the opportunity that Colin has given me to come in and get some games and grow as a player for a short period of time. Edmonton is halfway through their season and there is still a lot of work to do to make the playoffs. I’m happy to come in help the team.”

“You don’t develop as a young player by staying at the same level for three years,” said McKendry.” You have to challenge yourself and put yourself in uncomfortable situations and situations that are different. And that’s how you grow.

While McKendry is a new addition, Daryl Fordyce was at training, going through drills without missing a beat. Fordyce, FCE’s all-time leading scorer, returned to the Eddies last week after spending half a season with FC Cincinnati of the USL.

“It’s normal for me, it’s like I haven’t left,” he said. “I’m really excited, I’m just itching to get going. Just have to get the body right for the game on Sunday and I can’t wait to get across the line.”

Fordyce and McKendry are the new adds in the open transfer window. And Miller said, if the right opportunity comes along, he still has the budget to go out and get someone else. But getting a deal across the finish line won’t be easy

“I don’t think it’s ever done,” said Miller. “It’s an ongoing thing and we’re looking at next year already. If the right player comes in who can help the squad, the funds have been made available. But it has to be the right one. And it’s difficult at this moment in time because we’re offering short-term deals and not every player wants to come in and earn Canadian dollars on a short-term deal. So we’re looking at loans and maybe someone who wants to come in and get his career going again, it could be something like that. But the irons are out there, but it’s not as easy as everybody would think.”

With the likes of keeper Nathan Ingham, midfielders Dustin Corea and Nik Ledgerwood, and fullback Netan Sansara all training, Miller said he could have as many as 17 or 18 players ready for Sunday’s fall season opener against Indy. But defender Albert Watson will be serving his suspension Sunday for yellow-card accumulation.