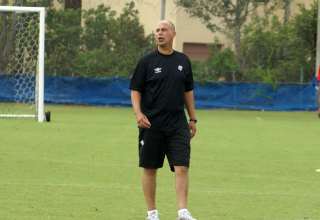 With the start of the Gold Cup just over a week away, Canadian players have all arrived in Toronto from their respective clubs to prepare for the CONCACAF tournament.

For most of the players, they will not have to wait long to see game action as Canada hosts Ecuador in a friendly on June 1 at BMO Field. Ecuador is a team that resembles many teams that Canada will have to face in the group stage of the Gold Cup.

“Panama, Guadeloupe and United States are hard-running, physical sort of teams. Of course they have technical abilities as well. So we thought it would be important to sort of match up with a team like Ecuador.”

Midfielder Atiba Hutchinson thinks Ecuador is a good technical team that is more than capable of breaking Canada down with its possession game.

“We’ve always know that Ecuador are a good team, a good possession team,” said Hutchinson, the reigning Canadian player of the year. “All the South American teams are strictly good passing and good possession so we have to be aware of that. Of course we’re going to have to be very organized and tough to break down. Also, we want to go out there and kind of express ourselves, play the way we’ve been trying to play lately. It’s a home game so hopefully we can get a result for the fans also.”

“I think we’re playing against a quality side,” added central back Kevin McKenna. “I think it will be a lot like the Peru game, they have a lot of technical players and we’re going to have to watch out.”

“But I think this camp we brought a lot of quality players here and obviously we didn’t train the whole week together but I think it’s a good game to prepare for the Gold Cup. Obviously that’s our main aim right now but a good preparation game against a quality side like Ecuador, I think it’s going to be a good match.”

Bringing the Team Together

Hart has selected a provisional 23-man roster for the preparation camp ahead of the Gold Cup tournament but will travel with only 20 players to the biennial championship. All 23 have competed for Hart at least once in international matches over the past 18 months. The selections are from professional clubs in Europe and North America, including three of the four Canadian teams from the Nutrilite Canadian Championship — Vancouver, Toronto and Montreal.

Almost the full squad practiced together on Monday morning in Vaughan, Ont. and another full practice is scheduled on Tuesday morning at BMO Field. Although it would have been ideal to have more practice time ahead of the friendly, Hart will ultimately rely on the preparation camp to decide who suits up for Canada in the Gold Cup opener against the U.S. in Detroit on June 7.

“For the game against Ecuador, today was the first day we’ve had 17 players in training due to club commitments but it’s important for us to play the game as we prepare towards the Gold Cup,” added Hart. “So it’s a good opportunity to get some relationships going as we play each other on Wednesday.

“This game is important for us to sort of work on what we’re trying to work on. We haven’t had a lot of time together, so the game would be a game where we would try to work on some things leading up to towards the group games of the Gold Cup. The game against Ecuador is an opportunity for us to sort of put some ideas together and try to gel as a team, but the camp will determine who plays against United States.”

Hart has seen a lot of players in various camps in the past two years and believes he has a very capable roster of players to choose from. However, he admits there are few areas of concern that need to be worked on and singled out his team’s approach play as a key area that needs improvement.

“I think in the last few games that we’ve played our approach play can be better,” said Hart. “We have a little tendency to rush the final pass in the attacking phase and sometimes our build up is a little bit slow. Things of that nature we will continue to plug away at. It’s not in our nature to go forward and we’ve been trying to change that.”

“I think we’ve reached a phase now where we want to get results and definitely we’ll be playing for it every time we step on the field. We have been in all honesty, but there are still some things to work out and iron out on the team and it’s going to be more important that it happens at the world cup qualification.”

Ecuador is also preparing for a tournament when the club participates in the Copa America in July. Ecuador’s Head Coach, Reinaldo Rueda, has assembled a roster that will be relatively unknown to Canadian soccer fans and consist mostly of players from its domestic leagues.

However, there will be one player that Toronto FC fans will recognize and that is new fan-favourite Joao Plata. The Guayaquil, Ecuador native was selected to his national team and will play in two international friendly matches in the next week. After playing against Canada, he will travel with the national side to New York where Ecuador will play Greece on June 7.

“I’m very happy to receive the call, but it’s important to continue to be responsible and humble,” said Plata who was quoted earlier in the month. “It’s a blessing and I’m very happy. My family taught me about being humble and having humility, we came from a lower status and worked our way up and it’s important for me to always remember that.”

Plata was selected 49th overall by TFC in the 2011 MLS SuperDraft. In nine games this season, the TFC forward has started in five, scoring two goals and adding two assists.

Importance of the 12th Man

In recent history, Canada has had a difficult time attracting fans to its home games whether it’s in Toronto, Montreal or elsewhere. Whatever fans that do attend matches, majority of the fans are often supporting the opposition rather than the Red and White.

“When you’re playing at home and it’s pretty much half and half, maybe certain games it’s more for the other team,” said Hutchinson. “You try not to think about it but of course it’s there. You want to come home, especially the qualifying games, and feel like you’re playing at home. I hope it can change a little bit the next time around, especially starting now against Ecuador.”

Hart has played and coached in many countries and has seen firsthand the importance of having strong fan support in large numbers. It can be a big advantage and can simply help a home team play better, but this kind of support just does not exist.

“When you go to play in certain places, one of the things you realize is that the fans can actually make a team, make the players on the team field feel like that they’re being outplayed, when really they may not be,” said Hart.

“So they do make a big difference, they do sort of lift the team and push the team on and we see it in all other sports. I think it’s the missing element we’ve had playing at home the last few years.”

Kickoff against Ecuador will take place at 7 p.m, ET and tickets can be purchased at the BMO Field box office or via Ticketmaster at 1.855.985.5000 / Ticketmaster.ca. Group rates are available via the Ontario Soccer Association (tickets@soccer.on.ca).