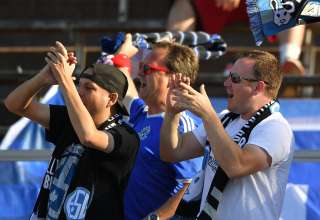 Members of the FCE Supporters Group celebrate a goal during a road trip to SF. PHOTO: ROB EDWARDS/SF DELTAS

It’s a relatively small sample size, but FC Edmonton has been more successful on the road than at home so far this NASL season.

The Eddies have played two road games, and won both of them, scoring five goals in the process. In three home games, the Eddies have a loss and two draws, and have scored three times, total.

So, with FCE heading southeast to take on North Carolina FC this weekend, will it be a case of road-field advantage?

“It might be a different mindset,” striker Tomi Ameobi, who scored in Saturday’s 2-1 win in San Francisco. “We know that we’re underdogs away, obviously that takes a bit of pressure off of us and we can play more free. But, picking up wins in this league on the road, as you know, is pretty hard. We’ll take as many wins as we can get.”

Coach Colin Miller looks back to a June 3 loss at Puerto Rico as the turning point for the Eddies. FCE was hammered 3-0 in the Caribbean that night, and Miller called it the worst performance by the Eddies since he took over as coach before the 2013 campaign. But, just days after that stinker, the Eddies went into New York and beat the Cosmos 4-2; the Eddies lost a couple of more road games after that, but were competitive in those games. And, in the fall, they’re two for two so far.

“I think the catalyst was the poor performance down in Puerto Rico, for everyone, not from any one particular player,” said Miller. “And I made the players watch that performance, that 45 minutes [first half] in particular, because I couldn’t bear to watch 90 minutes of it. I turned the volume down and made them watch that. I think that was the catalyst for the New York Cosmos result. We went from Puerto Rico being a horrendous performance into the New York Cosmos and winning, 4-2.

“And I think that mindset away from home has carried over in the majority of the games we’ve played. We have no fears going away from home, because the team is well-organized, the team is fit and we have pace in the team that will hurt any team in this league on the counterattack. I think it’s a combination of recognizing that I went crazy after that Puerto Rico game, thankfully I haven’t had to go crazy since then. The team has played well and been consistently good, but the difference is now we’re putting the ball in the back of the net and looking dangerous on the counterattack.”