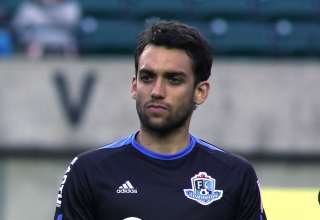 It was mentioned in Sunday’s match report on this very site, but it needs to be mentioned again… with the Canadian national team having an open roster spot due to the injury to Josh Simpson, and the friendly against the U.S. just days away (and World Cup qualifiers coming up fast), what would be the harm in coach Stephen Hart taking on FC Edmonton’s hometown star, Shaun Saiko?

For the second time this year, Saiko was named the NASL’s Offensive Player of the Week. He delivered an inch-perfect long-range cross to Yashir Pinto for the opening goal of the game, then scored his fifth goal of the season in FCE’s 2-2 draw Sunday with San Antonio. He also delivered another fantastic cross on a Paul Craig goal ruled out for offside. But, on our CBC.ca and TEAM 1260 broadcasts, play-by-play man Gareth Hampshire and myself are getting awfully used to describing yet another inch-perfect cross from Saiko.

With five goals and two assists, Saiko has been involved in more goals than any player in NASL — on a team that currently sits sixth in the standings.

But that doesn’t tell the whole story. Saiko is the best free-kick taker in NASL — and it could be argued that his shooting ability is better than any of the midfielders or attackers currently on the squad. In the San Antonio game, he forced Scorpions keeper Daryl Sattler into a fantastic diving stop on a laser beam 30-yard free kick.

He scored on a 32-yard drive against Carolina earlier this year. People in Puerto Rico still speak of the wonder goal he scored there last season. Opposing teams now that, from 35 yards in, Saiko is in scoring range. How many Canadian national teamers offer that kind of threat.

Yes, it’s easy for naysayers, especially those who only watch MLS but still proclaim themselves to be Canadian soccer experts, to pooh-pooh the notion of a second-division player getting the call. But fans who have watched Saiko pull the strings from midfield know about his vision. And, really, Hart shouldn’t be prejudiced against NASL — as he did call Ali Gerba, then with the Montreal Impact, to the Gold Cup squad in 2011.

And, make this clear. Saiko was an NASL Best XI player last season. Many of the guys who went to MLS from NASL in the off season were not. Saiko was and is better than many of the guys who moved, but MLS clubs are really only interested in NASL players who are out of contract. Because Saiko would have come with a price tag, calls didn’t come.

There are worse things Hart could do with that 23rd spot in the roster. Saiko deserves a look. He can go and play on that left side (Simpson’s spot) if need be. If you don’t use him… fine. But don’t limit Canada’s options by not having that spot filled. Saiko could get to camp within hours.