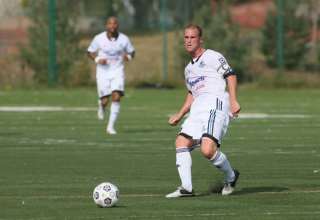 After last Sunday’s disheartening 2-2 draw at home to San Antonio, FC Edmonton’s players were gathered to talk about one facet of the team’s game: Set pieces.

In two straight games against San Antonio — a loss on the road and a draw at home — the Eddies gave up goals on open headers in the box off of set pieces.

The goal that gave Minnesota a last-gasp win over the Eddies in FCE’s Clarke Stadium opener came off a set piece. In fact, Edmonton fans can’t be blamed for chewing their fingernails every time the opposition has a corner, free kick or an opportunity for a long throw in the Eddies’ end of the pitch.

“We had a little talk about it after the game,” said holding midfielder Chris Kooy. “Sixty per cent of the goals we have given up have been on set pieces. So it’s definitely something we have to look at.”

Think about it. In many games that Edmonton hasn’t got maximum points, the Eddies have dominated possession and launched more shots at the target than the opposition. But, a long spell of domination goes out the window on a set piece.

Look no further than the Champions League final. Bayern dominated possession, shots on goal — but its inability to defend one late Chelsea corner kick turned what should have been a European championship into a bitter defeat. Poor marking on a set piece can undo 90 minutes of hard work.

Lance Parker, who last Sunday got his first start since he suffered a compound fracture to his arm last June, said language isn’t an issue. Even though one of his centre backs, Kevin Hatchi, doesn’t speak a lot of English, that’s not the issue. But communication can be a problem, because sometimes players get lost in the heat of the moment and don’t realize that the keeper is yelling at them.

“There is no language barrier, everyone out there speaks English well enough,” said Parker. “Really, it’s not what you are saying, but when you are saying it. Is the message getting through? Sometimes, guys get in such a zone when they play that they don’t hear what’s being said.

“You can keep practicing dead-ball situations, but in the end it’s about individuals and the team being aware. Everybody has got to be tuned in. We need to know who is taking the runner and who is not.”

Expect Parker to get another start on Sunday, when FC Edmonton hosts Atlanta at Clarke Stadium. (That game should wrap up at 4 p.m. MT, giving fans an hour to find a place to watch the Canada-U.S. game at 5 p.m. Edmonton time.) At Wednesday’s first of two training sessions, Parker was the only keeper to play through the entire scrimmage.

Kooy said defending dead-ball situations comes down to one thing: The competitive nature of the team. Yes, San Antonio and Minnesota make you feel like you are playing a basketball team rather than a soccer 11, because their players are so tall. But Kooy points to the second leg of the Amway Canadian Championship semifinal against Vancouver, which the Eddies dominated for 70 minutes before Sebastien Le Toux’s goal led to a late collapse. In that game, the Eddies fared well against a much bigger team.

“That’s the one thing about playing bigger teams, when we played Vancouver, they had a lot bigger players, but we did well. Players were talking to each other. And man for man we were able to step in. When you are defending set pieces, you have to do what they do. You have to fight like the other teams do. You have to have a killer instinct.”

And that’s not what Eddies’ fans saw late in the game against San Antonio. The compete factor seen against Vancouver needs to become the rule, not the exception.