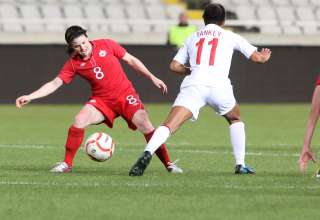 Rachel Yankey, the most capped women’s player in English team history, got the winner in Wednesday’s Cyprus Cup final. Her 69th-minute half-volley ensured that, for the second year in a row, the Canadian women’s would have to settle for the “finalist” tag for their efforts at the Cyprus Cup.

Yankey, who plays for Arsenal, gave England the 1-0 win over Canada in the final. The two sides will meet again for a friendly April 7 in Rotherham, England.

Jess Clarke played in a cross from the left and Yankey was able to smash home the winner from 12 yards out.

Canada had some decent chances to tie the game, but the English side did a good job of limiting Christine Sinclair, Canada’s all-time scoring leader. According the English FA’s match description (the game was not televised from Cyprus), Canada’s best chance to tie the game came when a sliding Kaylyn Kyle just failed to connect on a low cross in the English penalty area from Ashley Lawrence. In the first half, Jonelle Filigno missed from close range after some miscues from the England back line.

For the English, it was a sort-of measure of revenge, as Canada eliminated Great Britain from the 2012 Olympic soccer tournament with a 2-0 win in the first elimination round.