May 17, 2022
9 New Articles
Home NASL & USL More NASL & USL Counterpoint: Why the Cosmos’s dominance is good for the NASL 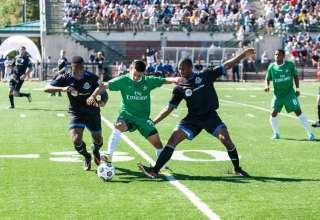 (Ed. Note: David Fellerath is the culture and sports editor for the INDY of Raleigh, Durham and Chapel Hill, N.C. After the publication of our opinion piece earlier this week on the Cosmos running away with the NASL fall title and how that’s not good for the league (CLICK HERE), David asked for the chance to feature his take on the subject. Of course, we agreed. The 11 should be a place for debate. Check out INDY Week’s website HERE. Even for the Canadian readers, it’s got a lot of meaty, well-written pieces that transcend the geographical distances. And the movie reviews are awesome.)

Steven, you write: “Alas, the New York Cosmos have been red-hot; and, in a league where draws are the norm, the Cosmos has been able to put together a series of wins and distance itself from the pack.”

My question to you: Is this a bad thing? There’s a lot of complaining from fans of other teams, but my own view is that the Cosmos are setting a standard their rivals should aspire to. Would the English Premier League be improved if every team was like Aston Villa, rather than having a couple of Arsenals and Chelseas? Or in the Bundesliga, a bunch of Freiburgs rather than a Bayern Munich or a Dortmund?

The National Football League has done a good job training us to think of “parity” as a desirable goal. For a closed shop like the NFL that has packaged its product for television consumption and needs unpredictable outcomes — as well as a justification for salary caps — t makes sense to force its teams to all be a little above or below average. MLS seems to prefer this model, too.

In fact, the parity that the NFL champions (for its own self-interest, not the fans’), is the exception rather than the norm. Even in the United States, college football and college basketball are worlds of giants and minnows. Plenty of people hate Alabama football, or Duke basketball, but they’ll tune in to root against them, and they’ll celebrate wildly when their own teams beat them.

In soccer, enforced parity is deadly. You yourself say that “draws are the norm” in NASL. For the teams placed 2–7, that’s more or less true, especially for two teams. Second-place Tampa Bay (five draws) averages 1.4 points per game. In the Bundesliga, that rate would put them in seventh place. NASL’s seventh-place Edmonton (also with five draws) averages 1.1 points per game, a rate that’s good for 15th place in the Bundesliga (an 18-team league).

Your argument seems to suggest that the competition in NASL should required to consist only of the Stuttgarts and Nurembergs, and the existence of a Bayern Munich, a Dortmund, a Leverkusen, should not be permitted.

MLS has followed policies to encourage parity, and it works: The Red Bulls have the league’s best record, earning only 1.66 points per game (a rate that would place them fourth in the Bundesliga and a distant eighth in the Premier League). MLS’s embrace of parity may leave a lot of teams feeling they can win the playoffs, but it’s not generating any heat in terms of television viewership.

But in leagues outside North America, a team typically needs to top 2.0 points per game to have a chance to win the league. The Cosmos are earning 2.1 points per game, and more power to them. I’m happy to see a team with some ambition being permitted to flourish, and let’s face it: By becoming the league’s big bad gorilla, they’re giving NASL some drawing power. Every other team’s sales office will look forward to hosting the Cosmos.

My hope is that the Cosmos will become an attractive-enough enemy that other teams around the league will secure the investment needed to challenge them. It’s also my hope that the USSF’s ownership standards for D2 teams will prevent the fiscal recklessness that contributed to the downfall of the original NASL.

Finally, I’m a bit puzzled by the complaints that the rest of this fall season is meaningless. Do we enjoy soccer or not? Do we enjoy supporting our clubs or not? We should ask ourselves why supporters of perennial also-rans like Aston Villa and Fulham and West Ham are still in the stands every March and April, with their teams long out of the running for the league title and eliminated from other competitions? Is it possible that they enjoy watching the games and cheering for their clubs?

*For the record: I’m a member of the media, so I try to see myself as neutral. But I’m often seen at Carolina RailHawks games. Sadly, one game I missed was the Aug. 10 contest in which the RailHawks dealt the Cosmos their only defeat so far this fall, by a 3-0 score.