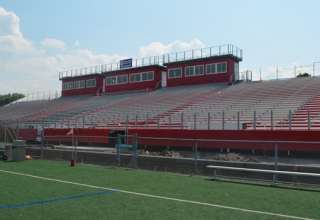 The Ottawa Fury FC will begin its first NASL season at Carleton University.

The team announced Friday that it will play its first five home games at Keith Harris Stadium, a multipurpose campus facility that has artificial turf and, yes, permanent football lines. The stadium has new bleachers that can accommodate up to 3,000 fans. The Fury stated that the facility can be expanded to handle as many as 5,000 people.

The NASL will keep the split-season format for 2014, when the Fury joins FC Edmonton as the Canadian members of the league. The 11-team league will see each club play a 10-game schedule in the spring, then break for the World Cup, then play a 20-game slate in the summer/fall. The winner of the spring season will face the winner of the summer/fall session in the Soccer Bowl.

With Ottawa playing 10 games in the spring season, that means five home dates, five on the road. So the entire spring campaign will be played at Carleton, while construction is completed on the team’s permanent home at Lansdowne Park. That is scheduled to be open for the summer, for both the Fury and the CFL RedBlacks.

“Many thanks to our partners at Carleton University and its Department of Athletics for providing us with an alternate and intimate venue for professional soccer as we await the completion of the new stadium at Lansdowne. Our fans will relish the chance to turn Keith Harris into a cauldron of fan support for Fury FC when NASL soccer arrives in our city,” said John Pugh, Fury FC President and OSEG partner, in a release issued by the club.