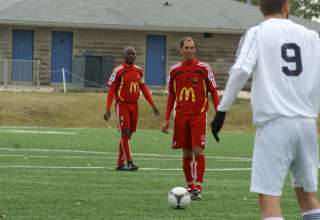 So many times, Cup finals are disappointing affairs, failing to live up to the hype. It’s been decades since a World Cup final has riveted us for 90 minutes — and since the Amway Canadian Championships went to a two-legged final, we have yet to have an encounter we’d stamp with the word “classic.”

But Thanksgiving Monday’s national amateur club championship Challenge Cup final between Royal-Select Beauport and Edmonton Scottish was compelling, the kind of game you’ll talk about years from now. Beauport, down to 10 men, triumphed over a Scottish side laden with former NASL and USL players.

Vincent Cournoyer, the Beauport goalkeeper, stopped two former FC Edmonton forwards, Chris Lemire and Kyle Yamada, in the penalty shootout in Winnipeg, allowing his side to triumph 4-2 in kicks after the match ended in a 3-3 draw. For Cournoyer, the shootout allowed him a chance for redemption, after he was found wanting on Scottish’s second and third goals of the game. But Cournoyer guessed correctly on two occasions, diving to his right to stop both Lemire and Yamada.

And that Beauport disadvantage was made all the much greater when, midway through the first half, Pascal Bragagnolo was sent off for a nasty studs-to-the-knees challenge on Michael McCormick, which forced the Scottish winger to miss the rest of the game. Bragagnolo did not help himself by standing over McCormick and barking at him after the contact was made. Scottish coach Kevin Poissant was also sent off for coming onto the field as the two teams had a brief scuffle after the tackle.

Soon afterwards, Scottish, which was dominating territorially, used the extra man to its advantage. Lam made a perfect cross from the right wing that was nodded home at the near post by defender Kyle Bartkus, who joined the attack all day long.

At the half, you’d be forgiven for thinking the second 45 would be academic — Scottish up a goal, up a man, with the loaded roster. But, Samuel Georget, the University of Laval product, simply took over the game for Beauport. Just a minute into the second half, he hit a ridiculous 20-yard volley inside the post that gave Scottish keeper Jay Vetsch no chance. And, five minutes later, Georget laid in an inch-perfect cross for Nafi Dicko-Rayaud to head home. Five minutes into the second half, and David had a 2-1 lead on Goliath.

But Scottish would roar back; four minutes after Beauport had taken the lead, Bartkus got his second of the game to level things at 2-2. He deflected a Lam shot into an open goal after Cournoyer came out to meet a free kick from Lemire. He punched the ball right to the top of the box, where Lam was able to get the ball and make the play for Bartkus. Cournoyer left the net wide open, and his punch was poor.

And Cournoyer will likely not want to see a replay of the goal that gave Scottish a 3-2 lead. Cournoyer could not hold onto a shot from Duberry, spilling it into the path of Edmonton striker Francisco Wong, who bundled the ball over the line.

But Georget bailed out his keeper with another moment of magic, a wonderful run down the right wing before laying off a lovely ball across the face of goal for Vincent Barrette to side foot home.

With each team having to play five games in five days, the extra time was played on willpower, as the game slowed to a jogging pace. But Beauport could have had the winner, but Vetsch came off his line smartly to block a shot from Boris Salou, who had sprinted past the Scottish back line.

And, in penalties, Cournoyer made up for his mistakes made during the first 90 minutes — and went from a potential goat to hero. And that’s what Cup finals should be about — massive momentum swings, overcoming adversity, in-game chances at redemption. They shouldn’t be timid, careful games, though they often are.

It’s a shame that this epic battle had to be decided on penalties. You wish that the organizers could go to both teams’ benches and tell them “we are going to have a replay. Let’s decide it on the field.” But, this is amateur soccer — and the players have day jobs to which they have to return.

So, a classic match — a match that offered far more entertainment than any game in the history of the Amway Canadian Championship, by the way — had to end in penalties. But, with 10-man Beauport giving Scottish, a team laden with former NASL and USL players, everything it had — it makes you wonder how thin the line is between the top levels of amateur soccer and the pro ranks.

On a day when most of us expected a Scottish coronation, Beauport showed us a lot of guts.