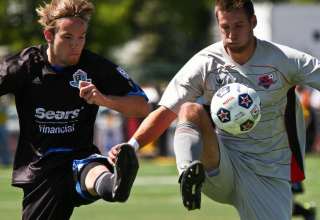 Paul Hamilton in action vs, Atlanta.

Despite a last-place finish in NASL, FC Edmonton has placed a player in the season-ending Best XI.

Eddies’ central defender Paul Hamilton was named to the squad, which was announced by the league on Tuesday. The centre back was named defensive player of week in mid-May and led the team in minutes played, with 2,024.

At the halfway point of the season, FCE midfielder/forward Shaun Saiko looked destined to make the Best XI for the second consecutive season. But, even though he finished as the Eddies’ leaders in goals and assists and represented Canada at the U-23 level during Olympic qualifying, he was sidelined for part of the second half of the season due to injuries and a one-game team suspension issued by former coach Harry Sinkgraven.