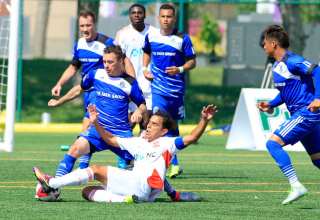 Maybe the Carolina RailHawks need to hire a shaman. Maybe someone at the club has wronged a Canadian in the past, and to fix it they’ll need to have Drew Beckie sing William Shatner quotes to the tunes of Rush songs.

Canada — and especially Edmonton’s Clarke Field — continues to be a place where the RailHawks go on point-less road trips. With 1-0’s loss to the Eddies on Sunday, Carolina finished a two-game winless road swing through Edmonton and Ottawa. The RailHawks still have never won a game at Clarke Field.

And Sunday’s loss may have been the most painful one of all. The RailHawks could very well have been up by two goals inside the first 15 minutes — but didn’t convert on either of two gift-wrapped chances. After a scramble in the penalty area, Jonathon Orlando got the ball at his feet, but Eddies’ keeper Matt VanOekel smothered the chance. And, after being left wide open in the box, Mexican star Omar Bravo headed the ball just to the wrong side of the post.

The game was decided in the 66th minute when RailHawks’ defender Simon Mensing slid and missed his interception attempt on a through ball that sent Eddies’ forward Tomi Ameobi on a break. He squared the ball for Jake Keegan to ram home into an open goal.

But, RailHawks coach Colin Clarke wasn’t only disappointed with the missed chances; he was fuming over the performance of Canadian referee Pierre-Luc Lauziere.

“It’s the same way whenever we come to Canada,” Clarke fumed. He was furious that Lauziere did not award the RailHawks a late penalty kick after what the Carolina coach felt was a foul by FCE defender Albert Watson on Matt Fondy. He also was angered that Pape Diakite, the other Eddies central defender, was not carded for a series of what the coach felt were unfair, rough challenges in the first half. In the end, Lauziere handed out three yellow cards to the RailHawks, while the Eddies received none.

Clarke’s meaning was clear; that the Canadian refs favour the Canadian teams. In NASL, PRO the referee organization that also administers games in MLS and USL, assigns refs for all games on American soil. But, the Canadian Soccer Association is in charge of refereeing assignments for NASL games in Ottawa and Edmonton.

With the win, the Eddies tie the New York Cosmos atop the fall season standings, but the Eddies have a game in hand. The Eddies are also in second in the overall standings, just a point behind the Cosmos — again, that game in hand also comes into play.

“And that’s the mindset. I don’t think we’ve been given enough recognition on how well the club has done this season. This is no fluke. You don’t get to be where we are at the moment by playing poorly, by not doing the right things. Sure, our goalkeeper has kept us in some of the games, but that’s his job. But today was a very workmanlike, professional performance, no panic and everyone committed to the cause.”

“Our foundation is defence,” said Keegan. “When we don’t have a lot of pressure to score goals, it makes it easier for us.”

The Eddies have not given up two goals in a game since May. They have won eight in a row at home.

“We have a lot of older guys, lots of experience on the team, lots of guys who know how to win,” said Keegan.

With just a few minutes left, Canadian Ben Fisk made his Eddies debut, and his effort forced his former Whitecaps Residency teammate Brian Sylvestre into an excellent save. As the Eddies pressed for a second, Sylvestre also made excellent stops on efforts from Ameobi and Gustavo Salgueiro.