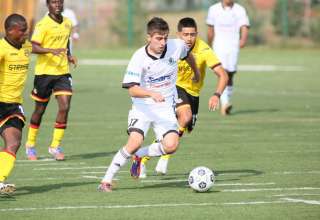 It’s a familiar refrain for Canadian soccer players trying to make it abroad: “Waiting on paperwork.”

For London, Ont.’s Elvir Gigolaj, that’s the case. He’s currently training with a Hertha Berlin reserve team, Hertha BSC Amateure II, but the former FC Edmonton and St. Mary’s University striker is waiting for the chance to step onto the field.

“Things are well, currently training with Hertha Berlin,” Gigolaj said in a message to The 11. “Don’t have clearance from the DFB to play yet.”

Gigolaj was cut loose by FC Edmonton in the break between the NASL spring and fall schedules, after an injury-ravaged early part of the season.

In 2011, Gigolaj was the buzz player coming out of CIS. For the Huskies, he scored six times in three AUS conference playoff games. And even though his St. Mary’s squad lost to the University of Victoria in the CIS final, it was clear that Gigolaj was the player of the tournament to watch. He scored in a quarter-final win over McGill. He scored twice in the semifinal triumph over the University of Alberta. And, in a losing cause, he scored against UVic.

Joe Petrone, who was then-director of soccer for the Eddies, visited with Gigolaj at the CIS championships and knew right then he wanted the kid from the Forest City to join his NASL side.

Gigolaj was slowly worked into the team through 2012, and then scored a heck of a goal on the final day of the season, a volley which began a rally that saw the Eddies come back from a 2-0 deficit to tie the Fort Lauderdale Strikers, 2-2.

But injuries hampered Gigolaj’s progress through 2013, and he was released by the Eddies halfway through the campaign.

Gigolaj was born in Croatia and has Albanian and Bosnian heritage. His family runs a successful bakery in London.