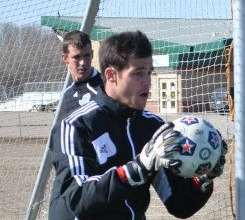 Before the meetings, we knew this: Midfielder Chris Nurse had turned down the club’s contract offer and will explore free agency (CLICK HERE). He already said his goodbyes to the club and the supporters. All-time leading scorer Shaun Saiko, after being sent to train with the reserves through the final stretch of the season, is now a free agent. And striker Michael Cox, out since September with an MCL injury, turned down a contract offer and he and his new agent will explore options in Europe.

And, the rest of the squad:

GOALKEEPERS:
Lance Parker: FC Edmonton’s No. 1 and the club continue their contract negotiations.

John Smits: The option on his contract was exercised and he’ll be back in 2014.

Norbert Janas: Brought up from the reserve team midway through the year, the young Canadian keeper won’t be back with the Eddies in 2014. He’s now a free agent.

VERDICT: With only Smits 100 per cent for next year, could coach Colin Miller be shopping for new keepers in the off-season?

DEFENDERS:
Albert Watson: The club and the team’s captain have come to terms on a new two-year deal. Watson was one of only two Eddies to be on the NASL’s MVP ballot (Chris Nurse was the other). Watson was one of Miller’s best signings of 2013, if not the best.

Mallan Roberts: He’s still waiting on his citizenship, but the Edmonton product by way of Sierra Leone is back for next season. Young, raw talent with so much potential.

Edson Edward: The right back was one of FCE’s most solid citizens in 2013, and his contract option was exercised. This will calm fears that the right back would be heading back to his hometown of Ottawa to join the Fury.

Lance Laing: Is in the midst of a two-year deal. The left back was the Supporters’ player of the year in 2013. Fantastic left foot and has the ability to press from the back.

Michael Nonni: The Canadian hasn’t played much but will get his chance. Option on his contract was exercised.
David Proctor: Negotiations between the Scottish veteran and the club are ongoing.

Antonio Rago: One of the last remaining original Eddies, his status isn’t certain for 2014. Negotiations between the local fullback and the club are ongoing.

Chris de Guise: He moved up from the reserves to the big club at the start of the season, but didn’t feature in NASL play. He will not be back in 2014.

VERDICT: Keeping Laing and Edward at the fullback positions was vital. This was club’s most-improved area this year.

MIDFIELD
Robert Garrett: His loan spell is up and he will be returned to Linfield.

Neil Hlavaty: The tough-as-nails American and free-kick and corner taker will be back for 2014.

Massimo Mirabelli: He scored the final Eddies’ goal of the season, and has showed promise on the left wing. The Brampton, Ont. native will be back in 2014.

Gagandeep Dosanjh: Hampered by some after-the-fact swelling from his knee surgery, the former University of British Columbia star will have the chance to use the 2014 season as his proving ground.

Hanson Boakai: The youngest-ever player to play in NASL and one of the stars of the Canadian U-17 squad, Boakai will be back in 2014.

Edem Mortotsi: The club has high hopes for the Edmonton product, and he showed some real promise in his NASL appearances. He now needs to find the net on those chances he creates. He’ll be back in 2014.

Wes Knight: The American veteran was plagued by injuries in 2014. His contract expires Nov. 15, and the club will have 30 days after that time to make a decision on Knight.

VERDICT: Four Canadian players retained, two of them local talents, in the midfield.

STRIKERS
Daryl Fordyce: The club’s leading scorer for the 2013 season has inked a new two-year deal. The Northern Irish forward saw his game rise steadily as he got acclimated to the North American game.

Sadi Jalali: The Edmonton teen has so much promise, and the option on his contract was exercised.

Corey Hertzog: It all started so well for Hertzog, scoring in his first game for Eddies after coming over to club on loan from Vancouver. But the American finished the season with just two goals. He’s on his way back to the Whitecaps.

Anthony Adur: He went from starter at the beginning of the fall season to a player who wasn’t on the travelling roster at the end of the season. Couldn’t find the net this season. His playing time diminished and, with it, his chances to make a claim to come back in 2014. He’s a free agent and will explore his options.

VERDICT: This is the team’s biggest area of need. Fordyce needs either a speedster or a target man to partner him up front. Team has to find the kind of striker who can create goals out of nothing, a player who is a consistent threat. Miller knows this is his biggest task.

OVERALL: Four local players — Jalali, Roberts, Mortotsi and Boakai have been retained. And if Rago and the Eddies come to terms, that will move up to five. And that doesn’t take into consideration that the Eddies could promote more players from their reserve squad.

Edmonton had maxed out its seven international slots. But the departures of Nurse, Carlyle Mitchell (who will likely stay in Vancouver after his loan recall) and Garrett open up three spots. We still wait on the status of Proctor. Eddies need to focus those open international roster slots on finding scoring help.