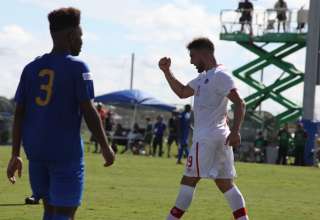 You have to wonder, if there comes a time when the likes of Jonathan David or Cyle Larin or Lucas Cavallini threaten the all-time record for national-team goals, how much their fortunes were boosted by being part of the first-ever CONCACAF Nations League qualifying campaign. It will be almost unfair to look at their ledgers and compare them to Canadian national-team players of the past.

On Sunday, we got treated to the first of Canada’s “very movable force vs. the unstoppable object” Nations League qualifiers against low-ranked Caribbean federations. There are three more to come.

And, an attack-minded lineup, with three teenagers — David, Liam Millar and, of course, Alphonso Davies — in the starting XI, were two goals up before the game was nine minutes old.

Canada went on to win 8-0. David, in his first start for Canada’s senior side, picked up where he’d left off in the red-hot start to his Belgian campaign. He scored twice. Cavallini scored twice. Larin came on as sub and got two. Junior Hoilett got a tap in on a feed from Davies (who also set up both of Larin’s goals) after Hoilett started the play with a great run up the right wing. Jonathan Osorio opened the scoring.

Basically, it looked like a training session out there. And this is what we expected. For long-suffering Canadian soccer supporters, it was nice to simply ask “who is going to score next?” rather than fret about a result.

Canada had 73 per cent of the ball. The Canadians outshot the USVI 16-0 (so keeper Milan Borjan, yes, indeed did play in this game, even if you didn’t notice him). Canada’s passing accuracy: 93 per cent.

Canada’s next Nations League qualifier is at Toronto’s BMO Field, with Dominica coming to visit. The last time the two nations faced each other, Canada won a World Cup-qualifying aggregate series 6-0 over the two matches. No doubt that the fans at that match in October will be looking for another goalfest.