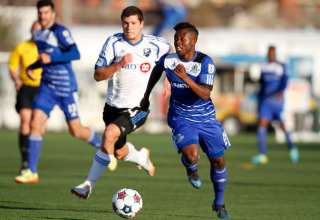 It was spotted maybe an hour before the teams went onto the Clarke Stadium turf.

A rabbit. Maybe it was a hare. Semantics.

Fans saw it. Security people saw it. FC Edmonton’s harbinger of good luck. How important is the rabbit as the spirit animal for every FCE player? Each FC Edmonton jersey has the image of a running rabbit pressed on the back, below the collar.

The supporters know; when a rabbit is seen at the stadium, good things happen for FC Edmonton. Maybe it was the mystical power of the rabbit that made Montreal Impact defender Karl Ouimette blow an 89th-minute defensive header on a long kick. Maybe it was the rabbit that gave FCE substitute Michael Nonni the foresight to jump on Ouimette’s turnover, round keeper Evan Bush, and score the goal that gave the NASL Eddies their first-ever Amway Canadian Championship win over MLS opposition.

Yes, the Impact got the road goal — and still have everything to play for next week when the scene shifts to Stade Saputo. But Nonni’s goal gave FC Edmonton its most famous win in team history.

It started with a long goal kick from FCE keeper John Smits. The ball sailed all the way to the top of the Impact’s penalty area. Ouimette got underneath it, meaning to flick it back to Bush. And then it all went horribly wrong for Montreal.

“I thought that I’m going to take a gamble on the ball,” said Nonni. “He’d been flicking it back to the keeper all game long… when I got the first touch, I knew I was going to bury it.”

After scoring, Nonni ran to the supporters’ section and leaped in.

“It was a great feeling, those guys have been supporting us all season long, in snow, in rain, in freezing cold.”

Last year, FCE coach Colin Miller was just one signature away from releasing Nonni. But he was swayed by the Canadian fullback’s work ethic — and he decided to keep him on. This year, Nonni has earned playing time and is currently the author of the biggest goal in FCE history.

“He has poured so much into being a professional footballer and sticking with FC Edmonton,” said Miller. “He deserves an enormous amount of credit.”

For the first 70 minutes, the story of the game was teenager Hanson Boakai.

Last week, Boakai set up two goals and scored another as the Eddies eliminated the Fury from the Voyageurs Cup. While the goals didn’t flow as freely in this match, which pitted MLS opposition against a team that currently sits dead last in the 10-team NASL, Boakai kept up his string of hellacious cup performances.

After Edmonton had gone down 1-0 to a Jack McInerney headed goal, Boakai went on an inspired run down the middle, blew around Impact midfielder Calum Mallace, then slotted a perfect defence-splitting pass for Tomi Ameobi, who calmly slotted the ball home.

Ameobi could have given the Eddies a winning goal later in the second half, but he headed a perfect cross from Boakai over the bar.

But Boakai’s performance was about more than those couple of passes; through the 70 minutes he played, he was the most dynamic, most dangerous player on the pitch. In the first half, he fizzed a shot just over the bar, and continually won ball after ball. He had Impact players back in away from him, as they worried about him shifting gears and blowing around them.

He showed a national audience and the 1,946 in attendance that he’s certainly something special. But, due to tiring legs, Miller took Boakai out in the 70th minute.

“This was a big moment for the team, especially for me, being the youngest player on the field, to play against big players like Patrice Bernier.

“Everybody likes to score goals, but I love it when I do assists… They (Montreal) couldn’t play in the midfield tonight. They had to hoof long balls, they had to force it.”

McInerney headed home a Patrice Bernier free kick early in the second half to give the Impact a vital road goal and the lead, just a minute after a bizarre miss. After a poor kick-out from Smits was intercepted by Bernier, the ball went to Blake Smith on the wing. Smits did well to come out and deflect the shot, but the ball popped up in the air and right to McInerney, who was about five feet from goal and had nothing but net to look at. But McInerney headed the ball off the bar.

The rabbit. It had to be the rabbit.

“This is a massive result,” said Miller. “I hope it kickstarts our season. “If we play like this consistently, we’ll be a handful for other teams in NASL.”

Montreal coach Frank Klopas said his team has no excuses. Yes, some regulars were left behind, but Klopas said the team has trained for the better part of four months — on turf — so there should have been no issues in Edmonton.

“Goals we gave up — unacceptable,” said Klopas. “In the end, we come all this way, you come away 1-1 and you say, OK. But to lose the game? Not a good feeling.”

And, good news for Edmonton. Rabbits are often seen in Quebec, too. They just need to find a way to get one near Stade Saputo next week.

Or maybe the Impact need to hire out Martin Picard to make pre-game meal of rabbit stew for the team.