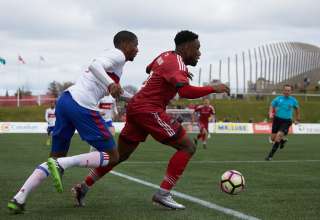 So, it was only fitting that Eddie Edward got the chance to meet and greet with his old FC Edmonton teammates at Ottawa International Airport. The Eddies were disembarking from their plane just as the Ottawa Fury players were returning from Charleston, S.C., where they drew the Battery over the weekend in USL play.

Edward, who spent three and a half seasons in Edmonton, was happy to meet a lot of old friends at the airport. It will help clear his mind when the Fury hosts the Eddies Wednesday in the first leg of the Canadian Championship opening round.

There are two major prizes at stake. First: The winner gets to meet Toronto FC, the MLS Cup finalist from last season. The second: Bragging rights when it comes to league-vs.-league rivalry. This match will mark the first time that a USL team (Ottawa) and an NASL side (Edmonton) have met in a meaningful game since the USL was granted Division-2 status and equal footing with the rival NASL.

As well, Ottawa left NASL for USL after the 2016 season, so there will be plenty of league politics on hand, sure to ignite more than a few Twitter flame-wars and online trolls. Fun!

But, for Edward, it will no doubt be an emotional game. At the conclusion of the 2016 spring season, the Eddies granted him his free agency, so he could sign with his hometown team, the Fury, so he could be closer to his family.

There’s won’t be any mixed loyalties for Edward Wednesday.

“Just like I know a lot of them, they know me,” Edward said. “I might have to pull some new tricks out of the bag.”

The Fury and Eddies are both enduring difficult starts to their campaigns. At 1-2-2, the Fury are second from the bottom in USL’s Eastern Conference. The Eddies have won just one of their first five NASL matches in 2017.

But Edward said the Fury won’t be fooled by the Eddies’ record so far.

“We know one thing to expect from Edmonton is that (coach) Colin Miller always has his team well-structured,” said Edward. “We know that when they start finding the back of the net, they are going to have success. So we have to limit their chances.”

Edward is still bullish about the Fury’s 2017 season prospects, though.

“It’s been great to have a full start to the season under my belt with my new club,” he said. “But it’s not quite the start we had  pictured. But we’re still very positive and we’re still very optimistic.”

Edward, who was mainly used as a fullback with the odd appearance as a holding mid in Edmonton, has been used in many roles by Ottawa coach Paul Dalglish. He’s been an attacking mid, a wing back, and played both left and right centre back.

The Eddies made some slight alterations to their lineup in Saturday’s loss to Miami FC, as they had Wednesday’s game on their radar. Former Arsenal youth and Rangers star Dean Shiels didn’t start, while captain Nik Ledgerwood, who was nursing a groin strain, was held out. Winger Sainey Nyassi also didn’t start.

“That’s why we’ve assembled the squad that we have,” Miller said. “We will change some bodies as we go along. Of course we have the Canadian Championship game on Wednesday night, which is massive for the club, absolutely massive. The incentive to beat Ottawa is arguably the biggest, best club, professional-wise in Canada, Toronto FC.”

Edward said the style of play in USL is very different from NASL.

“The major difference is just the pace of the league,” he said. “The game (in USL) is played at a faster tempo, which can be a challenge for a player’s fitness. In the NASL, a lot of times one team will try and control the pace of the game and slow it down, where in USL it’s a lot more end-to-end.”

That difference between leagues may be a product of geography. NASL has always leaned heavily on markets in the deep south of the United States. Games, no matter spring, summer or fall, are often played in sweltering heat. And playing in hotter temperatures forces teams to slow down the pace. That’s the challenge of soccer in North America; in the northern states and Canada, the winter is far too harsh to realistically play soccer at that time of year. But, in the summer, it’s really too hot to stage entertaining, fast-paced soccer. But, at least you can get games in during the summer, so it’s the lesser of two evils.

The Fury announced Tuesday that the club had acquired Belizean Michael Salazar on loan from the Montreal Impact. Salazar will not be eligible to play in the Canadian Championship for the Fury, only in USL action. The Fury has an affiliation deal with the Impact in place.