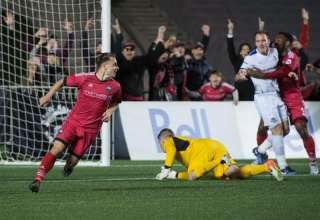 Ryan Williams’s 89th minute goal gave the USL’s Ottawa Fury a 1-0 advantage over NASL’s FC Edmonton in the first leg of the opening round of the Canadian Championship.

Eddies keeper Tyson Farago came out of goal to block the cross that came in for the Fury’s Tucker Hume, but the ball fell to Williams, who slotted the ball into the goal, bringing the less than 3,000 in attendance at Ottawa’s TD Place to their feet.

“It was a very tough, physical game with few opportunities between the two sides, but it’s disappointing with the manner we gave away the winning goal,” FC Edmonton head coach Colin Miller said in a release issued by the club. “We all win together and when we lose it’s my team. It’s only half-time in the tie, that’s the reality of the situation, and now they’ll come to Edmonton where it’s very difficult for visiting teams to get any sort of result.”

The Eddies will host the second leg next Wednesday, and will be kicking themselves over not getting a precious road goal out of the first game.

Canadian midfielder Allan Zebie had a glorious chance to get the Eddies a goal just before the hour mark, but was thwarted by a crazy-good save from Ottawa keeper Callum Irving.

Fury midfielder Eddie Edward — who spent three and a half years with the Eddies — was stripped of the ball by his former FC Edmonton understudy, Zebie. Then, Zebie played striker Tomi Ameobi into the Ottawa penalty area with a good pass. Irving came out to parry Ameobi’s shot, but the ball sat in the middle of the penalty area. Zebie got there and, for a split second, looked to have nothing to do but tap the ball into an open goal. But Irving dashed back to the middle of the goal and sprawled to block the follow-up shot.

That save, preventing a road goal, could prove to be more important than Williams’s goal.

The  Eddies also had the best chance of a rather conservative first half, It came right before the whistle. Ben Fisk dashed down the right side, and delivered a ball across the box for Dean Shiels. The Northern Irish attacker took a touch to take him away from the Ottawa defender, and then turned to side-foot the bouncing ball. Ottawa keeper Callum Irving came dashing off the line, and got enough of the ball to send it over the bar.

Surely, though, there will be Ottawa Fury supporters out there who would feel that Shiels shouldn’t have been on the pitch, after a late studs-up lunge on Onua Obasi. But Shiels only saw yellow for a challenge that had Fury coach Paul Dalglish jumping on the sidelines.

Williams had an earlier chance to score for the Fury, he looked to be behind the Eddies back line, running onto a through ball, but the play was stopped by a perfect late diving tackle from Edmonton fullback Shawn Nicklaw.