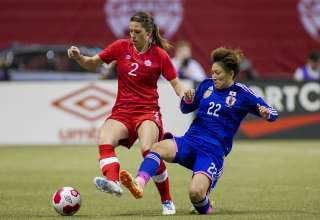 “Yeah, if you don’t beat these tier-one teams going into the tournament, you go into it with the ‘what if?’ factor. And we don’t want that. We want to go in there confident, that we can beat these teams, that we can compete with the best teams in the world. We need to do that in the build-up over the next eight months. So, Japan is a big test for us, and we’re not going out there to tie. We are going out there to win the game(s).”

The quote comes from a one-on-one interview I did with Canadian midfielder Desiree Scott late last week, before Canada played its two-games series of friendlies with Japan in Edmonton and Vancouver. (The full interview will appear in the winter issue of Plastic Pitch.)

After a 3-0 loss to the World Cup champs in Edmonton on Saturday, the Canadians really needed some kind of result Tuesday in Vancouver. Canada has played the so-called “tier-one” teams through the year, and it hadn’t yet claimed a win against the likes of Germany, the Americans or Japan. More losses and that “what if?” factor Scott spoke about just grows and grows — and you’d begin to wonder if coach John Herdman’s plan to play the world’s top dogs in the lead-up to the Women’s World Cup was going to do more psychological damage than good.

On Saturday in Edmonton, the Canadians could only claim the sort-of moral victory of playing Japan pretty even for 40 minutes in a 3-0 loss. On Tuesday at BC Place, the Japanese ran out a decidedly B squad, making nine changes to the starting lineup. Canada did very well to be tied 1-1, but, at about the 65-minute mark, the Japanese began bringing on the big guns, including midfield superstar Aya Miyama. And the Japanese ended up with a 3-2 win, thanks to two terrible defensive mistakes by the Canadian centre backs.

Right after Sophie Schmidt had brought Canada level at 2-2 in time added on, Emily Zurrer allowed her pocket to be picked by Japanese fullback Aya Saweshima, who then went in on keeper Stephanie Labbe and picked the corner for the winning goal.

Shortly after the Japanese made their changes, Canadian centre back Kadeisha Buchanan totally whiffed on a clearing opportunity. The ball fell to Yuki Ogimi, who deftly chipped the ball over Labbe, off the post and into the goal. That gave the Japanese a 2-1 lead at the time.

So, even though the two goals came after the Japanese brought in some of its big-time performers, they were the result of massive blunders by the Canadians. And, Canada finished yet another game against a “tier-one” team with a loss.

Sure, the Canadians can point to the fact that they created oh so many first-half chances that they didn’t convert. Japanese keeper Miho Fukumoto had to come out of the box to tackle Christine Sinclair; Jessie Fleming’s pass or shot (we’re not quite sure) went just wide after she made a blazing run down the left. From eight yards out, Adriana Leon blasted a shot over the bar.

The Japanese punished the Canadians late in the first half. On the second phase of a corner, Asano Nagasato blasted a volley into the top corner of the Canadian goal.

The Canadians came with more pressure in the second half. Japanese defender Azusa Iwashimuzu had to slide across the goal line to block Fleming’s goal-bound header from going in. But, on the ensuing corner, Sinclair took a short pass, slipped it back to Schmidt, who got into a good shooting position and blasted it in off the head of Mizuho Sakaguchi. That got the score to 1-1; the Japanese made their changes and the Canadians helped the visitors with two serious mistakes. What should have been a wonderful, spirit-boosting at-the-death equalizer from Schmidt was erased by Zurrer’s error.

But Canada’s series of friendlies is helping a team build its confidence ahead of the Women’s World Cup — the visiting team, that is.