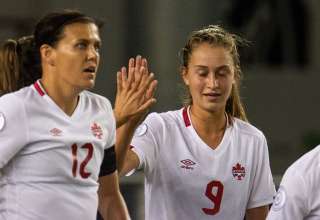 Christine SInclair’s foot swept the ball into the goal, the 174th marker of her international career and Canada’s 10th goal  on the night.

When her teammates came over to embrace Canada’s all-time leading scorer, Sinclair told them not to celebrate  (Or at least, that’s what my lip-reading skills suggested to me). In a blowout like this, there was no point in rubbing the noses of the Cuban players into it.

Canada would go on to beat Cuba 12-0 in Edinburg, Tex. on Monday.

Canada came into its second group-stage game of the CONCACAF Women’s Championship as the heavy favourites against Cuba. And, the Canadians also knew that Costa Rica, who had been expected to be the danger team in the group, had been upset earlier in the day by Jamaica. So, already having beaten Jamaica, an expected win over Cuba would put Canada clear at the top of their group.

And, well, it was like watching… training. Coach Kenneth Heiner-Moller didn’t start the strike force from the win over Jamaica — Sinclair, Janine Beckie and Nichelle Prince, choosing instead to rotate the Jordyn Huitema, Deanne Rose and Adriana Leon into the front line.

With the game already in hand, Sinclair was introduced at the start of the second half, clearly an effort to get her closer to all-time women’s international goal scoring leader Abby Wambach’s total of 184. On a two-player break, SInclair opted to pass to Huitema for a tap-in rather than take it herself. And when Sinclair got no. 174, she did not scream or raise her arms in triumph. She led her teammates quietly back to half.

Heck, there will be Canadian soccer followers who will be gutted that Sinclair “only” bagged one goal in her 45 minutes of work.  But, really, not to sound too much like the code-loving everyman from the sport with the skates and the puck, but it’s not the Canadian way to ask Sinclair to simply shoot, shoot, shoot when playing a minnow.

Rebecca Quinn and Diana Matheson also scored in the rout.