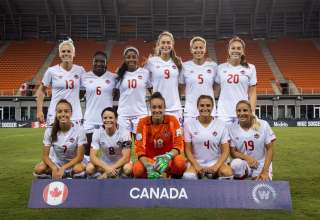 Canada's women get set to play in front of a lot of empty seats. PHOTO: CANADA SOCCER/MEXSPORT

On Monday night, the Canadian national women’s team rained goal after goal down upon their Cuban opposition in their group-stage match at the CONCACAF Women’s Championship.

But, essentially, we all see it as a World Cup qualifier — as the top three out of this tournament punch their tickets for the big tournament in France in 2019.

The game was held in a USL stadium in Edinburg, Tex. — capacity 9,700. There may have been hundreds in attendance, though. Canada vs. Cuba is not going to be a big sell in the Rio Grande Valley.

Just hours after Canada scored its 12th goal, FIFA released its “Women’s Football Strategy.” As in: How can soccer associations around the world — and FIFA itself, do better to grow the women’s game? The fact that it was released after one of the top-ranked teams in the world played in an almost-empty second-division stadium, well, we can’t see the irony in that at all, can we?

Now, let’s focus on one section of FIFA’s new women’s football strategy. And that was on how to better raise the profile of international tournaments. Here’s how it read in FIFA’s statement:

Here’s a suggestion. What would be a hell of a lot better than streaming a World Cup qualifying match from a mostly empty 9,700-seat USL stadium in Edinburg, Tex.? Seeing Canada playing World Cup qualifiers in Ottawa or in Toronto or in Vancouver or in Winnipeg or in Edmonton. Or Victoria. Or Moncton. Heck, there’s a decent stadium in Fort Mac. I streamed the game last night with my daughter sitting next to me. She cheered extra loudly when Diana Matheson scored, because Diana Matheson is one of her favourite players. But she asked why no one was watching the game in the stadium. And, for a young girl who dreams of maybe, just maybe, wearing a Canada shirt, it was kinda disheartening to see the lack of atmosphere or interest in the host city.

We’ve talked a lot over the years when it comes to the inequalities that exist between the men’s and women’s games. Pay. Playing surfaces. And, recently, news that the Women’s World Cup final in 2019 is scheduled to be played on the same day as the Gold Cup and Copa America championship games.

But, to me, where I see a massive gap is how we qualify for World Cups. The men play a full qualifying schedule. The process takes years, and sees Canada play home and away against its CONCACAF rivals. There are chances for Canada to play meaningful games at home.

The women, though, still qualify in the same sort of tournament format CONCACAF uses for youth soccer. The biggest teams in the region all travel to one CONCACAF nation — it’s the United States, this time — and play a quick tournament, with only a couple of days off between matches. The only team the home fans care about is the host nation. Everyone else plays in front of empty stadiums. There are no chances to grow the game by having the national sides all playing for-keeps home and away matches. Basically, the way it’s done now is antithetical to FIFA wanting to “optimize” tournaments.

So, even though Canada hosted the most recent Women’s World Cup, even though games filled cavernous venues like BC Place and Commonwealth Stadium, the mainstream attention placed on qualifying for the next World Cup is basically nil. Canada women’s team has disappeared off the radar.

Sure, Canada Soccer brings in top-flight opposition such as Brazil and Germany to play our women’s national team in this country. But, well, friendlies are friendlies. In the end, home fans need to see matches that mean something.

To me, the greatest inequality between the men’s and women’s games in North America is how both qualify for World Cups. The men’s program is built to maximize attention, the women’s system is about getting it done in a hurry. Sure, women’s soccer is structured differently; women’s national sides get together for extended camps, then play a slew of games. Men get together for half a week, play one match (maybe two), then go back to their clubs.

Sure, spreading out the women’s calendar would cost more. A lot more.  And there’s an argument that it might drive smaller federations away from women’s soccer — as they simply can’t justify the costs.

But isn’t there a bigger benefit here? At some point we’re going to need to say that “good enough” is just another excuse to spin our wheels. Sooner or later, we need to ask if we want to build the women’s game, or keep things pretty much status quo.