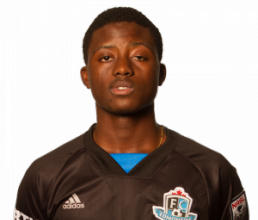 Fleming has called 23 players to camp, which begins on Saturday in Sunrise, Fla. and runs until April 4. The CONCACAF U-17 Championship, a qualifier for the U-17 World Cup, begins April 6. Fleming can only declare a 20-man roster ahead of the opening game in Panama, so three players from this roster won’t be part of the finalized squad.

There is only one senior-squad player on the roster; and that’s Hanson Boakai, the 16-year-old wunderkind who was moved from the Reserves to FC Edmonton’s senior roster in 2013.

If he sees the field in 2013, he will become the youngest player to ever participate in a modern NASL game. Scouts and FC Edmonton teammates rave about Boakai’s skill with the ball at his feet. Even at his tender age, he was deemed too talented to leave playing reserve-team soccer.

Kianz Froese-Gonzalez, who represented his birth country, Cuba, in the previous CONCACAF U-17s, has switched to the Canadian side. The Manitoba-raised player spent time with FC Edmonton before moving onto the Whitecaps Residency.