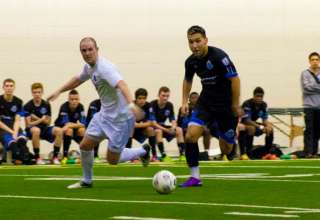 When Sadi Jalali signed a professional contract with FC Edmonton earlier this year, he didn’t envision himself as being on the fringes of the lineup. Even though he’s just 17 years of age, the Edmonton-raised prospect believes in coach Colin Miller’s adage that “if you’re good enough, you’re old enough.”

Jalali made quite the impression Wednesday, scoring four times in FC Edmonton’s 6-0 win over a team made up of Abbotsford select players.

“It was one of those days where everything goes your way,” Jalali said after the match. “You are where the ball is going and you make good contact. Just popping up in the right places and scoring.

“I just want to prove a point to myself and to the coach. I want to show that I can go out there and score goals. I can start, or I can come off the bench and contribute. I am not concerned about the age factor. Age is just a number.”

Returning striker Elvir Gigolaj scored in the first half after linking up with trialist Gagandeep Dosanjh. It was a combination between two players known for CIS excellence. Gigolaj led St. Mary’s to the CIS final in 2011; Dosanjh won the CIS championship and scored the Canada West-winning goal for the University of British Columbia in 2012. Ajeej Sarkaria scored the sixth goal of the day, assisted by Dosanjh. And Dosanjh could have had a goal of his own, but an attempt went off the inside of the post and stayed out.

As well, Canadian keeper Valerian Wiebe, who had been working out with Whitecaps goalkeeping coach Marius Rovde, got 20 minutes of work in for the Eddies.

“Gagan really made an impression, as we knew he would,” said Miller. “Sadi took his goals very well. (Michael) Nonni looked good in the wide positions and (teenager and Canadian U-17) Hanson Boakai got some minutes. He needed them, he’s had a bit of a hamstring strain.”

Dosanjh will rejoin his UBC mates as the Thunderbirds are next on FCE’s schedule of Vancouver-based training matches. The win over Abbotsford came a day after the Eddies lost to the Whitecaps Reserves by a 4-2 count. Dosanjh will then rejoin FCE for training as the Eddies finish their week-long preseason trip to Vancouver. Then, Dosanjh will go back to school, as he wants to get his degree before embarking on the next phase of his soccer life. Miller said FCE will look at making a decision about Dosanjh later in the spring.

And, as for Jalali, Miller was pleased with what he saw, but he’s also been enthused about what he’s seen from the other strikers on the club. With FCE averaging less than a goal per game in 2012, it’s a critical area that needs to be addressed. But, at the moment, look for Michael Cox, who looks even bigger and stronger this season, to partner former Linfield FC forward Daryl Fordyce up top.

“There is a bit of a pecking order. Michael Cox has been outstanding so far in camp and so has Daryl Fordyce. But there will be a lot of jockeying for that three or four position behind the first two. Sadi still has to work a little bit on his maturity but we have all seen it, his upside is tremendous.”