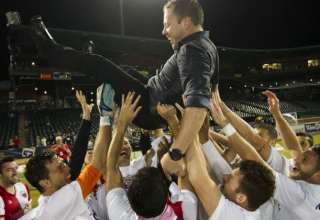 In an interview conducted by TSN’s Jason de Vos last Sunday, Canadian Soccer Association President Victor Montagliani spoke about the need for more domestic clubs. And he said it wasn’t just about creating more opportunities for Canadian players; he also spoke about the need to develop Canadian coaches and administrators.

The NASL, though, has proven to be a pretty fertile place for Canadian coaches to bloom. On Wednesday, the league announced that Ottawa Fury boss Marc Dos Santos is the league’s Coach of the Year. Considering that he’s led a defensive juggernaut of a team to the Soccer Bowl in only its second year of NASL play, the honour is well earned.

In an interview with Plastic Pitch (issue 7), Dos Santos said he and his team won’t have a sense of accomplishment unless they win the Soccer Bowl.

If Ottawa wins on Sunday, Dos Santos would be the second Canadian coach to win the NASL title. Alen Marcina led the San Antonio Scorpions to the championship in 2014, though he was relieved of duties after the 2015 season — and the future of the Scorpions in NASL is very much in doubt.

But, Marcina’s name has already been linked to a variety of jobs.

Dos Santos will be leaving the Fury after the Soccer Bowl to pursue a new role with an MLS club. Colin Miller just finished the first year of his three-year extension as the coach of FC Edmonton.

In fact, at the start of the this NASL season, with Marcina, Miller and Dos Santos all in place, there were more Canadian head coaches in NASL than there were American coaches.

But, when the time comes for a new Canadian national-team head coach, Dos Santos’s name will no doubt be in the mix, especially if he goes to MLS and enjoys the same kind of success he enjoyed in NASL and during his time as a coach in South America.

As this post goes out on Remembrance Day, I’d just like to take a moment to thank all Canadian veterans and families of Canadian veterans for their service to this country. We get to enjoy trivial pursuits like soccer thanks to the sacrifices made by many of our brave countrymen and women, past and present.