We broke down the Whitecaps, now we break down Toronto FC.

We looked back at Toronto FC’s disastrous 2012 campaign, but we broke down the games minute by minute. From that, we came up with a goal difference for every player on the Reds, similar to a plus-minus in hockey. And, we also looked at the Reds’ record when each player on the team was utilized as either a starter or a sub.

(For more on our methodology, check out the Vancouver Whitecaps recap. Click HERE)

We did not include the CONCACAF Champions League or Amway Canadian Championship in this statistical snapshot. This only includes MLS regular-season matches.

But this is what we can glean from the numbers:

• Ryan Johnson had the worst plus/minus on the team, at -25. Eckersley came in at -24. Bad numbers, but mitigated by the amount of time they spent on the field playing for a bad team.

• One TFC player actually had a plus performance. In all the minutes Nick Soolsma spent on the field in MLS play, TFC was a +1 in goal difference.

• Eric Hassli didn’t play in a TFC win, but finished even on goal difference. Hassli started and was subbed off in three draws. In two of those matches, he left the game with TFC in the lead — and those leads were enough to get him to even.

• TFC did not win in 14 games in which Reggie Lambe played a full 90. He had the fourth worst goal difference on the team, at -20.

• In just 15 games, eight of them sub appearances, Andrew Wiedeman “achieved” a goal difference of -14.

• Darren O’Dea racked up a whopping -10 in just nine matches. 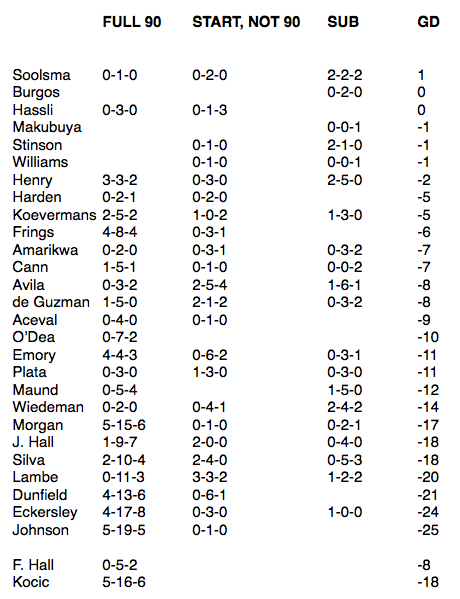