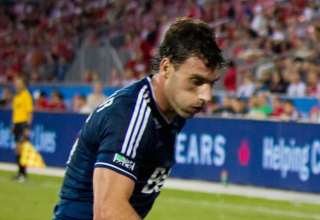 Unfortunately for Argentine defender Martin Bonjour, the final memory most Whitecaps fans will have of him is this: Looking back towards referee Silviu Petrescu, arms raised in innocence, as the official points to the spot.

Bonjour was officially cut loose by the Vancouver Whitecaps on Friday.

After starting the season as a regular, he was pushed to the fringes of the lineup for the second half of the season. Bonjour’s base salary in 2012 was US$192,000, which is far too much for any MLS team to be paying for someone who’s not a lock for the starting XI. When Irish defender Andy O’Brien came on board, Bonjour was pushed into the fray.

But he was forced into duty because of an injury to Jay DeMerit in October’s playoff play-in game against the Galaxy, and was immediately victimized. With the score tied 1-1, Landon Donovan burst into the box. Bonjour’s feet weren’t moving, so Donovan was on him like a shot. And, like a good experienced striker will do, Donovan leaned into Bonjour. If Bonjour moves, Donovan is by him. If Bonjour pushes back, there’s a good chance a foul will be called. Bonjour pushed back, the ensuing penalty was converted, and the Whitecaps went home — and the Galaxy went on a playoff run that culminated in its second consecutive MLS Cup.