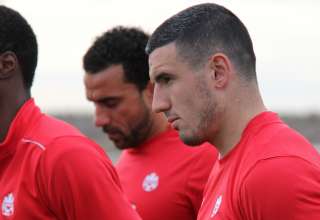 Injuries to fullback Andres Fresenga and forward Frank Jonke have made a thin Canadian squad even thinner ahead of Saturday’s friendly with Denmark.

Interim national men’s team coach Colin Miller said both players suffered knocks in training this week in Arizona, and are officially listed as questionable for Saturday’s match. But reading into Miller’s follow-up comments, and you have to think both players will be out.

Miller later said the goal was to get both players healthy enough to play in Tuesday’s night’s game against the United States. If that’s the goal, it’s likely both players would be held back. Because Miller has just 19 outfield players at his disposal, he could compromise his squad if Jonke or Fresenga could only give him a couple of minutes against the Danes and then missed the date with the Americans.

Miller also said that starting keeper Lars Hirschfeld had been suffering back spasms, but trained Friday.

“Hopefully he’ll be fine for the game,” said Miller.

With many national-team veterans in training camps, league play or marketing themselves in the transfer window, the Canadian Soccer Association brought in a young-, experimental squad, with an average age of 25.

Even though many are new to the senior squad, Miller has been impressed by their attitude. He said veterans Terry Dunfield, Dwayne De Rosario and Hirschfeld have set “terrific examples” for the young players.

“I think the whole week, training wise, has been extremely successful,” said Miller.

“I think the key to the whole week of training is how simple we’ve kept it.”

Each team will be allowed six subs on Saturday. The same rule applies for the friendly against the Americans. This means a lot of those Canadian senior-team rookies will see the field, many of them on Saturday.

“We’ll give them a chance and see how they handle the occasion,” Miller said.