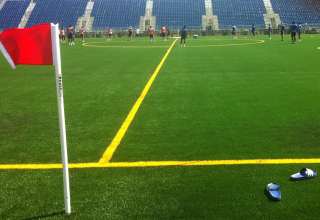 The City of Edmonton’s Community and Public Services Committee’s agenda for its April 18 meeting includes a discussion on “Support for Professional Soccer in Edmonton.”

What that entails is a discussion on the future of Clarke Stadium, the city-owned facility that the Eddies have called home since the 2012 NASL season. Securing Clarke is key if FCE is to be resurrected in the new Canadian Premier League, which is set to begin play in 2019. The Eddies announced in 2017 that they would not be returning to NASL and were suspending the club’s professional program. The team is running its academy program in 2018. Since then, a fan-led #YEG4CPL initiative has been staging regular events to build awareness for soccer in the Alberta Capital and to drum up support for FCE’s potential return.

But a stadium deal is crucial to FCE’s future. Tom Fath, who owns the team with his brother, Dave, has said repeatedly that he won’t bring back the Eddies in CanPL unless he sees that the team can be “feasible.” As well, Edmonton is one of the three Canadian finalists to be a World Cup host city in 2026; so if the United bid wins the right to hist the tourney, Edmonton will need an expanded Clarke as a training venue for the nati0nal teams that will visit the city. Clarke was used as a training facility for the Women’s World Cup in 2015.

On the committee’s agenda for next week:

“Administration has received a request from Fath Sports for the City to provide the following, all of which require further discussion.

3. Canadian Premier League/FC Edmonton will be the exclusive professional soccer tenant of the City of Edmonton

4. Canadian Premier League/FC Edmonton will be the primary tenant of Clarke Stadium

8. Naming rights for the field in Clarke Stadium

Fath said that the requests made of the city aren’t specific to FC Edmonton. These asks reflect “guidelines” that the CanPL has for all of its teams. So, taking that at face value, that would mean all CanPL teams will need 7,000-seat venues and the ability to control their dates – and concessions.

In 2012, the Faths purchased stands to increase Clarke’s capacity from 1,500 to 4,153. But, the team never was given prime-tenant status, meaning it did not get the first right of refusal on potential dates. That meant the Eddies didn’t always what they felt were the prime times in which to play their home games. For much of their existence, the Eddies have played on Sunday afternoons, though experiments (when possible) to play games on Friday and Saturday nights led to surges in attendance. Edmontonians, simply put, don’t want to spend their summer weekend afternoons at sporting events.

According to Edmonton’s administration “Clarke Stadium is currently subject to existing food and beverage contracts which are in place until 2021,” so an exception to this, to allow FCE to benefit from concession sales, needs discussion.

As well, the proposals, if approved, would give the Faths pro-soccer exclusivity at Clarke, so if another CanPL team would call Edmonton home down the road, it would need to find another place to play.

From the city’s administration:
“Administration has discussed with FC Edmonton these requests and options to achieve what the Canadian Premier League and FC Edmonton believe are needed to sustain a franchise in Edmonton. Several of the requests could have significant budget and/or business implications to the City.

“Administration will continue to work with FC Edmonton on a number of key elements of the request, including a review of the long-term viability of the league, operating budget implications to the City, capital cost estimates for any facility upgrades or improvements, and impacts on the community and other Clarke Stadium users.”

Administration also suggested compromises would need to be made with other sports organizations, such as minor football, about alternate sites in which to play games. “Ongoing conversations with Clarke Stadium users and stakeholders regarding amenities required to host games and the use of alternate sites, such as Jasper Place Bowl, will also continue.”

Fath said he will likely be at City Hall next Wednesday to answer any questions officials may have.

“We have a great relationship with the city’s administration. The fact that this is now being brought forward to the committee, that’s great thing.”