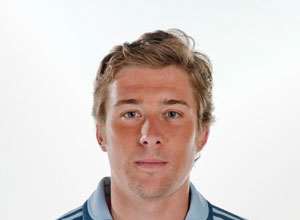 Matt Besler was named the MLS Defensive Player of the Year on Tuesday, while Whitecaps’ centre back Jay DeMerit had to settle for fourth in the voting.

But the voting numbers were fascinating to read. The Sporting Kansas City man won the award based on a strong show of support from the media — but he didn’t get nearly that kind of endorsement from either MLS coaches, general managers or players.

Besler appeared in 31 matches for the league’s best back line, which gave up just 27 goals this year. And Aurelien Collin, Besler’s fiery teammate, finished third in the voting. So Besler won despite having to survive a Kansas City vote split.

Through the media vote, Besler built a big lead. And he needed it. When it came to voting amongst the club execs, Besler got just 10.35 per cent of the vote. Bernardez got 32.76 per cent. Collin got 22.41 per cent. So, among coaches and GMs, three times as many thought Bernardez was better than Besler.

Let’s move to the players’ vote. Bernardez won that, too. He got 16.48 per cent support of the players. Besler got 13.19 per cent. So, Bernardez won the coach/GM vote handily, and he won the player vote. Yet, he’s not the Defender of the Year. Can we say the words “electoral reform?” And, come to think of it, doesn’t the way MLS splits votes into three categories — clubs, media and players — remind you a bit of the electoral college?

Why is it that Americans have to make voting for anything so complicated? Are our neighbours to the south so stat-driven that simply saying “most votes wins” is too gauche and easy for them? To think, with the time saved by going to a “one voter, one vote” system, you could come up with four or five new almost-meaningless statistical categories for MLS matches!