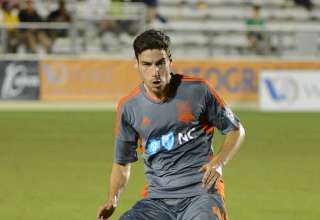 The Jacksonville Armada announced Tuesday that the club had inked Beckie to a new deal. Last season, Beckie played 1,592 minutes over 23 games for The Team Formerly Known as the Carolina RailHawks (now North Carolina FC). Beckie spent 2014-15 with the Ottawa Fury; before that, he was with the Columbus Crew of MLS.

Beckie has represented Canada at the U-23 level.

And, even though NASL has a new rule in place which allows for Canadians to be domestic players on both the rosters of Canadian and U.S. teams, Beckie would not have taken up an international slot on the Armada roster. Beckie has his American residency paperwork, though he is not an American citizen — he was born in Saskatchewan, but grew up in Colorado.

His sister, Janine, has become a fixture on the Canadian women’s national team.

“Drew is the total package,” Armada coach Mark Lowry said in a release issued by the club. “He is a player who will suit our style of play perfectly­ – a great athlete who possesses impressive technique and composure on the ball. Off the field, we have added a man of great character and another leader in the locker room.”

San Francisco has already signed three Canadians — Nana Attakora, Kyle Bekker and Karl Ouimette — for the coming 2017 season. So, we are seeing that some American NASL teams will feature Canadian content in the coming year. And, every time Unattached FC loses a player, well that’s a good thing.