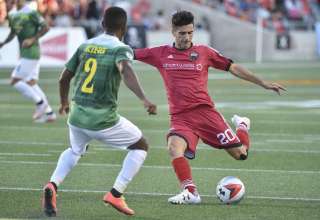 Eustaquio in action against Tampa Bay in 2016. PHOTO: STEVE KINGSMAN/NASL

Mauro Eustaquio was destined to become an Eddie.

FC Edmonton confirmed the signings of the Canadian midfielder, along with and Norwegian midfielder Sabri Khattab on Tuesday — and later announced the team’s plans for a four-game, two-week tour of Manchester, England.

But Eustaquio was supposed to become an Eddie in 2016. In the summer, around the same time that the Eddies had loaned defender Mallan Roberts to the Ottawa Fury and also released fullback Eddie Edward so he could sign with his hometown team, Eustaquio was supposed to come the other way in a loan deal from the nation’s capital to the Alberta capital. In fact, he’d already spoken to the Eddies staff about making the move before it was scrubbed.

“For some reason, the deal didn’t go through,” said Eustaquio.

But, this year, he’ll be wearing the Eddies colours after spending the previous three NASL seasons with the Ottawa Fury, where he made 47 appearances. He has represented Canada at the U-20 and U-23 level.

“I spoke to a number of people about Mauro and obviously we’ve had the chance to go against him in the past,” FCE coach Colin Miller said in a release issued by the club. “We’re well aware of his quality and I think he’ll be an upgrade for us in the middle of the park.”

Eustaquio said he had a couple of offers on the table, including one from the Fury to return to Ottawa and make the move to USL with the club. But, after a heart-to-heart with Fury coach Paul Dalglish, Eustaquio and the club went their separate ways.

“What it comes down to is that I’ve got to play,” said Eustaquio. “Two seasons ago with Ottawa, we went to the final and I played a lot of minutes. Last season, I got to play some, but my role wasn’t the same.”

Of course, he knows that he won’t be handed a job by the Eddies. So far, only he, Khattab and fullback Netan Sansara are the only new signings the club has made. Everyone else on the roster, so far, is a returning player. Eustaquio said he knows that he has to “fight for a spot,” but it’s a challenge he’ll relish.

Before making the decision to sign with the club, Eustaquio sought out the advice of other Canadians on the Eddies; he knows fullback Allan Zebie, midfielder Ben Fisk and keeper Nathan Ingham. He also spoke to Edward, who had to make the move from Edmonton back to Ottawa to deal with personal issues. He heard good things about the club, and that influenced his decision to take the Eddies’ offer over a couple of others that were on the table.

As well, Martin Nash, the Fury’s former assistant coach and a long-time teammate of Miller’s on the national side, gave a glowing recommendation of Eustaquio’s abilities to the Eddies.

He’s looking forward to playing in the Canadian Championship’s opening round against the Ottawa Fury.

“It will be a special moment for me,” he said. “I was in Ottawa for a long time, it was great to be in Ottawa. But, at the end of the day, I now wear FC Edmonton’s jersey, and those are the colours I’ll fight for.”

Khattab played four season with Norwegian side Bryne FK, and moved to Kvik Halden in the January, 2016 transfer window.

“I think he’ll be a strong addition to our squad,” Miller said. “He’s an attack-minded, left-sided central midfield player who’s scored goals in his past and played at a good level in Norway.”

The Eddies also announced plans for their preseason trip to Manchester, England. The Eddies will be in the north of England from March 9-22, and will play Wigan’s reserve side, Burnley’s U-23 side,  Newcastle United’s U-23 team and Stoke City’s U-23 side. The team will train on 3G artificial turf at the University of Manchester.

“FC Edmonton is coming off its best season in club history, and last year’s successful run started with games against top competition during a preseason trip to Scotland,” NASL Interim Commissioner Rishi Sehgal in a release provided by the league. “With this year’s trip to England, the club will have a tremendous opportunity to come together as a group and train at a high level going into the season. I think the trip as a whole demonstrates, once again, the strong commitment and passion of owners Tom and Dave Fath.”