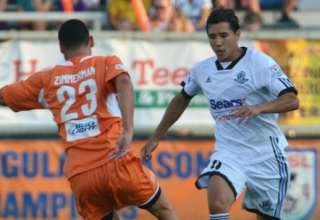 Is FC Edmonton doing this year what the Montreal Impact did last season? After a disheartening 2-0 loss on the road to the Carolina RailHawks on Saturday, the parallels between the Eddies and the Impact of 2011 are more and more evident.

Like the Impact last year, the Eddies of 2012 were darlings of most of the NASL pundits. No, FC Edmonton didn’t quite get the overwhelming endorsement to win the league that we saw Montreal get in its final Division-2 season; still, the feeling was that Division-2’s lone Canadian franchise would be one of the NASL powerhouses.

But, as the Eddies limp home to prepare for their Canada Day date at Clarke Stadium against the Puerto Rico Islanders, they find themselves trailing Fort Lauderdale by five points for the final playoff spot. The Eddies, shockingly, are entrenching themselves in seventh place.

Of course, the Impact fizzled badly in the first half of the 2011 NASL season and, despite a late surge, couldn’t escape seventh place.

Like the Impact, are the Eddies digging themselves a hole that might to be too large from which to climb? As of the end of June, you could argue that FCE is the biggest disappointment out of the four Canadian pro clubs. Montreal has been a very good team at home in its first MLS season; Vancouver is well over .500. You could say Toronto FC has done more to antagonize its fans, but, unlike Edmonton, there isn’t a (realistic) Toronto fan out there who would have expected this year’s edition of the club to be anything but poor. The fact that the team is the worst in MLS is definitely a blow, but it’s not as disappointing as an FC Edmonton team most figured to be a contender languishing in seventh place.

The Eddies have won just three of 12 games. In today’s loss to Carolina, the team’s two high-profile off-season signings, forward Yashir Pinto and midfielder Serisay Barthelemy, came on as… subs. Barthelemy returned after an injury spell that dated back to the Amway Canadian Championship. Pinto has been hampered by some nagging injuries, but the fact is he’s on the bench as a coach’s decision.

In 2011, Montreal made its late surge because it addressed its offensive challenges, and brought Miguel Montano and Ryan Pore in on MLS loans in order to shore up the offence.

For the Eddies, the issue is the back line. Once again, midfielder Chris Kooy played in the back as a converted centre-half. Kevin Hatchi returned to the lineup from injury, but was used in his more comfortable left back position. Depth on the backline continues to be a massive issue for the Eddies. From the first minute on, FCE keeper Lance Parker was under siege in Saturday’s loss to Carolina. With less than two minutes gone, Parker put on a ridiculous display of goalkeeping, first pushing Kupono Low’s shot away from goal and off the post, and then stopping not one, but two crazy chances that came on rebounds — the first from Ty Shipalane and the second from Low. But Parker can’t be a miracle worker week after week (and, to be fair, it needs to be mentioned that the only win the team has secured in a month came at home to Fort Lauderdale because Parker stopped a penalty and another point-blank chance). So, eventually, Carolina’s pressure resulted in a goal. In the 34th minute, Nick Zimmerman beat defender Paul Hamilton down, cut into the six-yard box and beat Parker.

Four minutes later, ex-New England Revolution forward Zack Schilawski laid the ball off for Breiner Ortiz, who was wide open in the left side of the area to fire home.

“I think the start of the game wasn’t good,” said FCE head coach Harry Sinkgraven. “We lost the ball too easily and the start wasn’t good. In the defence, we gave chances away too easily as well.”

FCE got a break in the second half, when ex-Impact Amir Lowery got yellow cards about two minutes apart, leaving his team with 10 men for the final 14 minutes plus stoppage time.

Still FC Edmonton could do no more than try some long, speculative efforts at RailHawks keeper Ray Burse.

FCE claimed its first win of the season over the RailHawks, a 3-0 decision back on May 6. The way the two teams looked on Saturday, that first Eddies win felt like it came years ago, not a month and some ago. The RailHawks are red hot, shooting up the standings, while a season of so much hope for FC Edmonton is in serious danger.

And unlike the Impact of 2011, FCE can’t gloss over a poor season with hope about moving to MLS next year.