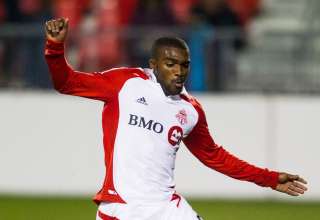 It hasn’t taken Paul Mariner long to master the initiation of any Toronto FC head coach: watching his team give away points thank to stoppage-time allowances.

For the second consecutive match, the Reds blew a two-goal lead by giving up an equalizer in the closing moments.  Chris Tierney’s conversion in the 94th minute stole a point for the New England Revolution in Saturday’s 2-2 draw, a result that comes less than three days after TFC saw another win slip away thanks to a last-minute goal in Houston.

That’s two points that could have easily been six for the Reds, as Mariner is still looking for his first victory (0-1-2) since taking over from Aron Winter as the team’s head man.

“The disappointment is palpable.  We’re all gutted.  We were 30 seconds from a win that would’ve done wonders for us,” Mariner said.  “Sometimes when you get to 90-plus minutes you’ve got to dig as deep as you possibly can to get that W.”

The draw was, frankly, a result that flattered the home side, as New England dominated play late in the game and outshot TFC 10-0 after the 66th minute.  The Reds could easily have conceded more goals were it not for some good luck (the Revolution twice hit posts) and a tremendous performance from goalkeeper Milos Kocic, who made seven saves.

Still, Kocic could only do so much against the constant pressure.  Following a long shot from Benny Feilhaber in the 71st minute that Kocic stopped, Blake Brettschneider was left unmarked and the substitute buried the rebound to put New England on the board.

The goal opened the floodgates and Toronto did all it could to just hang onto its one-goal lead for the remainder of the game.  When Feilhaber rocketed a shot off the post in the 88th minute, it appeared as if lady luck was finally on the Reds’ side.

“You hope for once this season that….we would be lucky,” said striker Danny Koevermans, who scored his fifth goal in as many games to give TFC the early lead.  “When they hit the post I was like, ‘OK, this can be our first win [due to] luck’ but yeah, 20 seconds left, one good cross and it went in.”

The Revs found success all game long with set pieces and Florian Lechner’s corner in the 94th minute was no different, finding Tierney for the tying goal.  It was the fourth time this season (in all competitions) that TFC has allowed a goal in the 90th minute or later that has cost the team a win or a draw.

“We worked so hard and ended up only tying.  It was in our hands, the game was in our favor,” said left back Ashtone Morgan.  “Always in MLS, the last five minutes of every game is a big fight.  Teams start sending their big boys up and…trying to win every second ball.  For us, we need to learn how to see the game out and ensure the win.”

Morgan was the key figure in TFC’s first half, which was probably the best 45 minutes the team has played this season.  The Toronto native set up both Reds goals with brilliant crosses from the left side, the first finding Koevermans in the fourth minute and the other in the 42nd minute that went past a diving Koevermans and off the head of striker Ryan Johnson, who split two defenders for the touch.

While Morgan’s pressure was excellent, he also bore partial responsibility for TFC’s late-game collapse, along with fellow defenders Jeremy Hall, Richard Eckersley and Doneil Henry.  With Adrian Cann out with a knee injury and captain Torsten Frings taken off in the 67th minute, it left the young back line to weather the Revolution’s attack, and the group’s inexperience showed.

“It’s a catalogue of learning on the job.  It’s just a fact that we’ve got a very, very young back four,” Mariner said.  “I think it’s pressure.  They’re young players, [the veterans] can only push them so far.  The nerves kick in.  Pressure situations change habits and decisions, that’s what it’s all about.

Mariner used the same starting XI as he did in the Houston game, and you would expect changes to be forthcoming not just because of the result, but also simply due to the congested fixture schedule.  Saturday’s match was the third in a stretch of 10 games in 33 days for Toronto, with the next coming on Wednesday in Montreal.

TFC could get some reinforcements in the form of Luis Silva, Nick Soolsma and Miguel Aceval, the three players arrested in Houston on charges of public intoxication on Monday.  None of the trio dressed on Wednesday but Silva came on as a substitute against the Revolution.  Mariner said that he wanted to use Silva as a replacement for Eric Avila and that Soolsma and Aceval were also available for selection had he seen fit.

Centre back Cann is out indefinitely with a right knee injury, a definite cause for concern given that Cann missed almost a year of action after tearing his right ACL in May 2011.  Preliminary tests have indicated that the injury is “not as bad as we thought it was,” according to Mariner, and not a tear, though an official diagnosis is still forthcoming.