February 03, 2023
9 New Articles
Home Global Game CONCACAF NASL commissioner to meet with CSA execs: To discuss how NASL “can be a better partner” to Canada 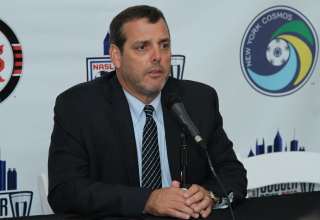 NASL commissioner Bill Peterson will be in the nation’s capital on April 19, when the Ottawa Fury plays its first regular-season match on the Carleton University turf against Minnesota United.

As part of the trip to Ottawa, Peterson will meet with the Canadian Soccer Association officials. His stated goal? To find ways that NASL “can be a better partner” to the CSA. He said that, now that he’s settled in as the league commissioner, he wants to create a closer working relationship with the CSA.

Peterson said the league “will explore options on how we can better align ourselves with the CSA’s professional goals.”

What that means is unclear. The Canadian Soccer Association has a mandate to create a series of regional Division-3 leagues, but the NASL’s role as a recognized Division-2 league in Canada is untouched. But, as the NASL fights for relevance, the optics of going to the CSA with a “how can we help you?” stance definitely scores PR points for Peterson and his crew. Remember that the Canadian Soccer Association’s continuing plea to have Canadians recognized as domestics in Division-1 MLS has consistently fallen on deaf ears. In 2009, Canadians saw an average of 1404.1 minutes per team in MLS; in 2013, that number had plummeted to 1025.2 minutes allocated per team to Canadians, despite the fact that the number of Canadian franchises had gone from one to three in that time.

Peterson also backed his league’s decision to ask CONCACAF to give the NASL its own berth in the region’s Champions League. He said the league is one of the big players in the region, and the NASL champion does deserve to go to the Champions League. But he knows the best way for the league to prove its worth is to have either Ottawa or FC Edmonton upset MLS competition in the Amway Canadian Championship, or have an NASL team win the U.S. Open Cup. Then it will be more difficult for CONCACAF to ignore NASL’s call for recognition as a unique entity.

The NASL season opens this weekend with two Canadian teams in action — the Ottawa Fury and FC Edmonton. While Peterson told journalists on a season-preview conference call that his preference is to see more teams in the American midwest and west, he hasn’t ruled out more teams on the U.S. East Coast or… Canada.

Peterson will no longer talk about specific cities — a marked change of strategy, as in his tenure we had grown used to him speaking quite candidly about what cities were in the expansion bubble. But he said that “even more intense conversations” are being had with one interested party in a Canadian city, and that things “continue to run hot and cold” in another market north of the border.