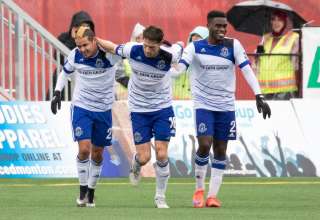 Fifteen years ago, Allan Zebie was a boy, playing soccer in the playgrounds and on the streets of Paris with his friends and cousins.

Now, at 22, he’s half a world away, hoping to get a call to represent a national team that wears rouge, not bleu. He plays for FCEdmonton and has developed into one of the best young fullbacks in Canada. Zebie could have been playing for the Eddies when he was a teenager — before Colin Miller took over as coach and overseer of all player transactions. When FC Edmonton began NASL play back in 2011, Joe Petrone was the director of soccer operations.

FCE assistant coach Jeff Paulus said that the club wanted Zebie in the senior ranks; but the young player got some “advice” from others player on how to negotiate with Petrone, and Zebie got frozen out.

So, Zebie moved around; he tried his luck with Leeds United and Scottish side, Rangers. He trialled for both of them. He also was a member of the Canadian U-20 side that played in the 2013 CONCACAF Championship. But, with new leadership in place at FC Edmonton, he returned to the Alberta capital in 2014 and trained with the first team. In January of 2015, he signed a professional contract with the NASL side.

But, even the most eternal optimist would not have predicted the young Canadian would have played in 14 of his team’s first 23 games.

“The coach told me to come here [the first team] and train like I did last year, but I wasn’t expecting to play that much,” Zebie said. “At first it was hard. For the first two games, it was kind of hard to get in there. The wingers in this league are really fast. It took a couple of games, but, after, I was able to get used to it. You have to stay focused the whole game. If you make just one mistake, they’re going to score on you.”

Zebie hasn’t looked like an NASL rookie. He can play either on the left or the right. And Paulus was disappointed that Zebie was left off the roster for the Canadian team that will attempt to qualify for the 2016 Olympics.

“Looking at the roster for Olympic qualifying, in my opinion, Allan is better than any of the other fullbacks who are there. I really believe that.”

Zebie was nine years old when his parents decided to leave France and begin new lives in Canada. They settled in Quebec, where Zebie would go on to play for the provincial side and be part of the National Training Centre program.

“We didn’t have a car over there. The first thing, when we got to Montreal my father bought was bicycles for me and my brother, because we never had any. It was kind of hard over there [in France], that’s why we moved to Canada. There were better opportunities here.”

But, Zebie says that his family knew that the money was better in Alberta than Quebec; when he was 15, they made the move to Edmonton.

From there, his soccer career has continued to climb and, now he’s established himself as one of the best young fullbacks in the country.

“I want to finish my two years here. I have two years left to go here, with contract options,” he said. “So, hopefully I can get more minutes, to get around 15 games would be nice. And, to get a call for the full national team, that would be cool, yeah. [In the last year] I’ve definitely got more confident. I guess I’ve always had those abilities, but you have to be really confident to show it, to express it. Hopefully, I also get better offensively, to get forward and get more assists.”

And, he also had the pleasure of getting to be on the field as for an NASL game at the same time as his brother, 19-year-old Bruno. Because of an injury crisis, the Eddies signed Bruno, a product of its academy, to a week-to-week emergency contract. And, he came in as a sub in the Eddies’ 1-1 draw in Fort Lauderdale back on July 11. Zebie made the pass that Sadi Jalali smashed off the post, then came off Strikers’ keeper Josh Ford and went into the net.

“It was great,” recalls Allan. “We’d already played together in the reserves for a couple of years. He’d wanted to play in the first team for a while, so it was good to play with him. And then he came on and, in that game, he got an assist, right? So, he was great, I wish he could have stayed with us for longer.”